Say Goodbye in the New Clip from The Green Inferno 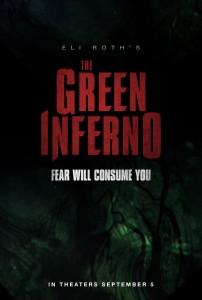 A new clip has been released for Eli Roth’s upcoming Cannibal Holocaust-esque The Green Inferno and it shows a couple of friends saying goodbye. Kaycee (Sky Ferreira) asks Justine (Lorenzo Izzo) to be safe as she ventures off to save the rainforest, but as The Green Inferno vows; no good deed goes unpunished. When their plane crash lands, the area they are trying to protect soon becomes a place to be feared.

Check out the clip below and give yourself a bite sized taste of the terror of The Green Inferno. If you want more, have a look at the trailer which is a full-blown, nightmarish explosion of horror.

Synopsis:
One young girl and her friends are convinced they can make a different to the problems in the Amazon by travelling there to try and save the rainforest. Unfortunately for the group, it’s not only animals that roam the dangerous territory; there are also tribes that have the taste for the flesh of humans.

Hopefully The Green Inferno will be something we can get our teeth in to, be sure to catch it when it arrives in US cinemas on 25th September 2015.