The first trailer for Polaroid has been unleashed and it shows the horrors that follow after a student finds a mysterious Polaroid camera. When your picture is taken, you die. Simple as. That probably serves her right for laying claim to something that doesn’t belong to her. 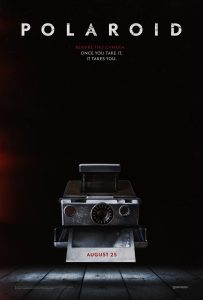 Synopsis:
High school loner Bird Fitcher has no idea what dark secrets are tied to the mysterious Polaroid vintage camera she stumbles upon, but it doesn’t take long to discover that those who have their picture taken meet a tragic end.

The trailer gives us a good look at the shadowy figure that stalks the victims of the camera’s haunting ability and also showcases a few impressive scares. Even though there are clear similarities between this, Final Destination, The Ring and even the Goosebumps Say Cheese and Die story, we are still impressed with the trailer’s ability to frighten and surprise. One fiery school moment is particularly effective.