An executive producer on all the Saw films, Peter Block has chosen a brave project for his inaugural foray into directing. A horror producer of some prestige having also worked on The Devil’s Rejects, Hostel and The Midnight Meat Train among many others, Block has announced that he will be helming a remake of cult monster movie/slasher Pumpkinhead.

The 1988 original was directed by the late special effects legend Stan Winston, also making his directorial debut. It starred genre icon Lance Henriksen as a store owner who raises the titular demon with the help of a witch to take vengeance on those he believes are responsible for the death of his son.

“Pumpkinhead is one of my favorite horror films of the late ’80s, early ’90s,” Block enthuses. “Stan Winston sits on that Mount Rushmore of iconic filmmakers because of his creature designs, and that was his first directing effort. The creature’s great but the emotional story is wonderful as well.” 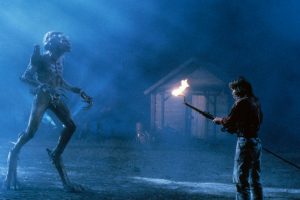 All too aware of the popularity of the film among horror fans, as well as the universal love for Winston and his work, Block is keen to stress that he will be paying homage to the original film and rewarding viewers familiar with it. “There’s a lot of Easter eggs for people who know the original — iconic shots and iconic lines that we’re going to use,” he says, adding,“…we’ve enhanced the setting, and we’ve expanded the characters somewhat, to give it a different kind of experience.”

Pumpkinhead is not a perfect film by any means, but is held in prestige mainly due to its iconic and beautifully-realised monster and impressive practical effects. A big worry among fans with remakes like this is invariably that the filmmaker involved will opt for an overuse of CGI to bring their creations to (digital) life. Block does his best to put such fears to rest early on however, insisting that “I am a big proponent of practical effects. That was the great thing about the original. A lot of the films I still respond to most today, it’s because of the practical effects. We think that it’s going to be a nice slow reveal, lots of scares and lots of action in the beginning, and a great creature in the end, which everybody should be able to look at and say, ‘Oh, that’s Pumpkinhead!’ It’s not like you’re all of a sudden going to find that it’s some amorphous, nebulous, CGI wispy thing. You’re going to know it came from the Pumpkinhead family lineage.”

That will be music to fans’ ears. We’ll bring you more on the film when we get it.