Charlie Clouser’s score to the first Saw film was absolutely incredible and I would argue it’s one of the greatest horror scores of all time. Especially “Hello Zepp” which accompanied that heart-stopping ending. It wouldn’t be Saw without Charlie Clouser, so it’s great for us to report that he will be composing Saw: Legacy, continuing his streak of composing them all.

When speaking about returning to the franchise, Clouser said:
“I’m psyched to be scoring the re-invention of the Saw franchise. […] After a six-year break from the world of Saw, this will be an opportunity for me to re-imagine how I approach the score, and I’ll be trying a more stark, bold, and stripped-down approach that will be more in line with the strong vision that the Spierig brothers are bringing to the table.”

It’s been 6 sad years since the last Saw film was released and, quite honestly, we’re incredibly excited about the prospect of another addition to the franchise. Who doesn’t want to hear those infamous words, “I want to play a game?” again? Exactly, we all do. 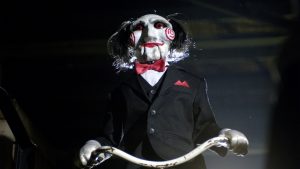 Directed by The Spierig Brothers (Predestination, Daybreakers) with a script written by Josh Stahlberg and Pete Goldfinger (Piranha 3DD), Saw: Legacy will be returning to cinemas next year in its favourite spot: Halloween, on 27th October 2017. Let the game begin.