With filming wrapped on Saw: Legacy, directors Michael and Peter Spierig are already moving ahead with their next genre project. The brothers – who debuted with fun Aussie zombie comedy Undead in 2003 and have since helmed Daybreakers and Predestination – already have principal photography underway on supernatural chiller Winchester for CBS Films. 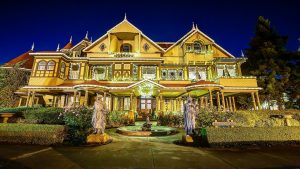 The film is based on the infamous Victorian mansion known as the ‘Winchester Mystery House’ in California (pictured), where Sarah Winchester lived after the death of her husband, gun magnate William Wirt Winchester. Notable for its ‘from the ground up’ construction and architectural curiosities, the house was claimed by many including Winchester herself to be haunted by all those killed by her husband’s rifles.

Shooting is currently taking place in Melbourne, Australia, but will soon move to the actual Winchester Mystery House in San Jose, California.

Here’s the official word:
The film follows the story of firearm heiress Sarah Winchester (Helen Mirren), who was convinced that she was haunted by the souls killed at the hands of the Winchester repeating rifle. After the sudden deaths of her husband and child, she threw herself into the 24-hours a day, seven days a week construction of an enormous mansion designed to keep the evil spirits at bay. But when skeptical San Francisco psychiatrist Eric Price (Jason Clarke) is dispatched to the estate to evaluate her state of mind, he discovers that her obsession may not be so insane after all. Winchester will take audiences inside the labyrinth-like house that is believed to be one of the most haunted places in the world.