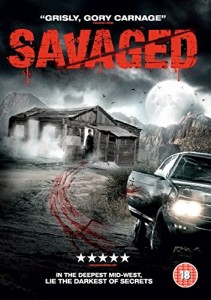 Synopsis:
A deaf girl is brutalised by a murderous gang who are then hunted by her when the bloodthirsty spirit of an Apache warrior inhabits her lifeless body.

Step aside Eli Roth and Lana Del Rey as writer/director Michael S. Ojeda’s rape/revenge thriller, thankfully, hasn’t been locked in a vault for over a year. That’s not entirely true I guess as it has taken a while to reach these shores but it was certainly worth the wait.

Whilst the sexploitation sub-genre tends to engender more scorn than praise, its latest addition, Savaged provides such a welcome fix of outlandish concepts that the end result is a unique and truly rewarding experience.

To further this point, many have likened it to previous revenge films such as The Crow, I Spit on Your Grave and Last House on the Left but, although these influences certainly do shine through, Ojeda shrewdly evokes said nostalgia but adamantly goes against the grain to take the audience to uncharted sexploitation territory.

Playing very much in the film’s favour is our protagonist, Zoe (Amanda Adrienne) who is everything but your conventional, successful city slicker. Savage opts for a much more vulnerable and overly-sympathetic deaf woman who decides to drive a few states away to finally move in with her boyfriend.

Despite a couple of second rate players, most of the actors give it their all. This is particularly the case with Adrienne who rides out the most brutal of gang rapes and the subsequent metamorphosis like no other; within the first few minutes you really can’t help but falling for her and her ill-fated predicament so no matter how evil she may turn, she’s got you firmly on her side. Supporting roles (played blazingly by the likes of Tom Ardravany, Ronnie Gene Blevins, and Brionne Davis) are also inspiring and Rodney Rowland is on fine form as the shot caller in his bungling group of neo-Nazi bumpkins. Adrienne’s innocent magnetism versus the sheer savageness of her attackers will have you over-anxious for the bloody vengeance mechanics to come into play.

Unlike virtually every other rape/revenge flick, in Savaged the only trump card Adrienne can play is to be possessed by a dead Apache which, of course, will come at a price. Remember how Tammy Lauren got her own back in 1997’s Wishmaster or, more recently, when Alex Essoe chose fame over friendship in Starry Eyes? Once our damsel succumbs to the dark forces the action scrambles to the forefront and it’s surprisingly remarkable how well executed and enterprising it is given the moccasin-string budget at play.

Ojeda not only turns the dials up full whack on both the action and gore fronts but his tongue also manages to apply constant pressure to his cheek. Akin to Wirkola’s recent gorefest, Dead Snow 2, the carnage in Savaged is certainly not for the faint-hearted but the director’s pitch black humour agenda is clear and all the bloodshed is purposely sophomoric.

Savaged is a violent, fun and, at times, emotional homage to some of the best grindhouse sexploitation films out there whilst packing one hell of an unconventional homegrown punch. Ojeda’s teeth cutting days as a documentary filmmaker clearly served him well and he is sure to have a prominent future no matter what direction he chooses next.