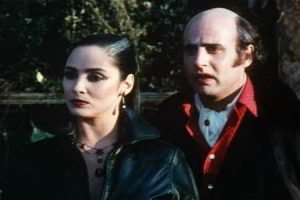 Synopsis:
Average American couple, John and Mary (Richard Benjamin and Paula Brentiss) inherit a ramshackle house from a recently departed uncle. After moving into the property with their children Billy and Debbie, a local vampire starts perusing the grounds in the hope of retrieving an ancient book hidden somewhere in the attic: a book which predicts a supernatural uprising on that upcoming Saturday the 14th.

Over the years, horror and comedy have often made harmonious bed-fellows, but there are a number of these genre hybrids that are frankly, abominable bunkum. For every Sean of the Dead, What We Do in The Shadows or An American Werewolf in London, are a dozen Scary Movie sequels (or some sorry straight to video equivalent). During the mid-late last century the likes of Abbot and Costello Meet Frankenstein, Carry On Screaming, Fearless Vampire Killers and Young Frankenstein emerged. Another surge of sub-genre fusions surfaced throughout the 1980s. Jekyll and Hyde Together Again, Once Bitten and  Love at First Bite (which also starred Richard Benjamin) were so-so stabs at satirising our nightmares while Return of the Living Dead and Re-animator melded medicine, zombies and comedy, as Ghostbusters and Gremlins exploded into pop culture sensations. There were a lot of stinkers too, most of which debuted and died on VHS before decaying in video bargain bin hell or in rain damaged cases at car boot sales.

Saturday the 14th was sadly such an atrocity. This shoestring spoof from 1981 lacks scares, laughs, likeable characters and anything remotely resembling a well-crafted story. A feature debut from Howard R Cohen (writer of kids cartoon series’ Rainbow Bright and The Care Bears, amongst the more adult themed likes of Emmanuelle 5, Vampire Hookers and Deathstalker); Saturday the 14th flaps about in candid inanity like a clown after too much cake at a birthday party, before collapsing in his own coagulating vomit. After opening with an animated/ Scooby Doo-like credit sequence, Cohen’s film targets a variety of horror icons and sub-genres. Despite the title alluding to the Friday 13th series, there are hardly any riffs on the stalk and slash sub-genre. Cohen’s film mostly parodies revered horror classics like: Dracula, The Wolf Man, The Mummy, The Twilight Zone, Jaws and Creature From The Black Lagoon. A Nightmare on Elm Street gets a nod but there’s nothing on the Voorhees’ franchise from which the title derives.
Usually amusing actor/ director Richard Benjamin (Westworld, Witch’s Brew) zombies through the role of everyday dad/ husband John, as does Paula Brentiss (The Stepford Wives) as the archetypal wife/ mother Mary. A couple of comical lines confusing bats with owls are uttered in the opening act but, following this, Saturday the 14th swiftly crumbles into a frivolous clutter of crap fancy dress costumes and lolly stick gags. Rubber suited actors gazelle about the backdrop in attempt to raise spirits but most of the humour is exasperating and not even funny for the wrong reasons.  A weird bearded creature with fingers for a head shows up to befuddle young son Billy while older sister Debbie is pursued in her bathrobe by an amphibian mutant, in a sequence which plays like a slowed down Benny Hill chase. 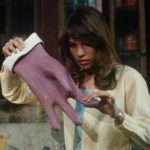 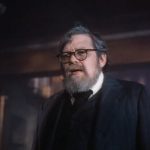 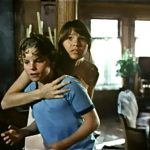 A puffy Van Helsing arrives to twunt the ersatz Dracula in the risible final act while animatronic rats scamper through ghost train sets as patently fake, severed heads bob into shot. A belfry bat attack proves surprisingly tense/ graphic and the recurring joke involving owls continues to raise chuckles, but these two moments are far too fleeting to amount to anything other than welcome spats of clarity from the midst of a galling stupor, before the film finally judders and culminates, 80 odd minutes too late. Howard R. Cohen never blossomed into much of a film-maker following his debut. He went to make Deathstalker IV: Match of the Titans in 1991 and, before that, had the audacity to helm Saturday 14th Strikes Back in 1988. Like the first one though this is not readily available but may be found as a relic in a cursed garage sale somewhere off the beaten track, on the way to hell.