During the 1980s there was a great fear in western cultures, and no it wasn’t terrorism. It was Satan. The fear was of a satanic conspiracy, with satanists in high ranking positions throughout all walks of life. Mediums of popular culture were being used to recruit new followers and brainwash the young. Satanists could be your neighbour, your teacher, your co-worker, and while normal during the day, they would be wearing robes and making sacrifices with fellow worshipers at night.

It’s a truly fascinating topic, and this new book from Fab Press goes to some length to try and explain how and why this happened. Growing up in the eighties, I remember seeing the newspaper headlines and the general paranoia of the mainstream press. Satanic Panic features essays and interviews by 20 writers on the subject to provide an in-depth examination and the untold stories.

The first essay covers the memoir Michelle Remembers, which was a book published in 1980 by a psychiatrist recounting his work with an abuse victim. The exploitative therapist ties it all to her unwilling involvement in a satanic cult and the ritual sexual abuse she received in the name of Satan. All of these were repressed memories that he “helped” to uncover. There is a great deal more to this story and while some of the conclusions and assumptions made would be laughable today, back then it was perfect news fodder. It was accepted as fact without question by news and chat show outlets, sparking paranoia and further satanic abuse stories.

There are a couple of essays on board games and role playing games like Dungeons and Dragons, which were another gateway to the satanic as seen by conservative Christian media. One of my favourite essays is all about the war against cartoons on TV. There were, of course, claims about violence in such cartoons being bad for children. One of the biggest targets was the He-Man cartoon, an occult figure with more power than God.

One of the most sensationalist and paranoia stoking events of the 1980s was The Geraldo Rivera Show’s episode Devil Worship: Exposing Satan’s Underground. This extremely exploitative show tied serial killers, murderers and metal all together and was such a ratings success that it spawned future episodes with the juicy topic of satanism. The chapter on that topic is engrossing, including an interview with one of the panelists representing the Church of Satan who was pretty much set up by Geraldo.

A good portion of the book is focused on the area of music’s supposed role on bringing youth into the satanic fold. We’ve all probably heard the claims that playing certain metal records backwards reveals subliminal messages. Metal music became the scapegoat for many of society’s ills, from promiscuity and violence to satanism. Then it was not just the music, but the videos on MTV that were influencing the masses into moral decline. There are also essays about movies and, in particular, the rise of home video and technology as a delivery system for satanic influence. The book shows that the phenomenon was not just in the U.S. and includes chapters on the satanic paranoia in Britain, Canada, and Australia. 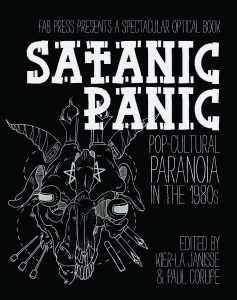 Satanic Panic is an engaging read that provides an in-depth examination of a unique time in the history of pop culture. All of the essays are incredibly interesting and effectively present key moments and themes from the satanic paranoia that swept the U.S. and Britain. While many of the reactions may seem laughable to us in this day and age, it was very much real and serious back in the 1980s. This is a wonderful book filled with both colour and b/w pictures, newspaper articles, posters, and TV and movie stills. I highly recommend this book.