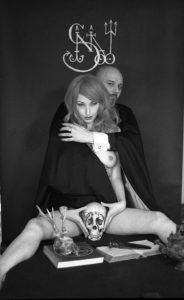 Last week, I was fortunate enough to attend the launch of Satanic Mojo #4 in Central London. At Orbital Comics, creator Jason Atomic spoke about his lifelong fascination with the occult, proposing his ideas about Satan as a symbol of autonomy and apostasy, and that free love can be a powerful source of magic. As such, Satanic Mojo #4 is an oneiric jaunt through the realms of the sacred and the profane, with stories ranging from vengeful priestesses, necrophilic lovers and priests converting to a form of Satanism.

Though it hardly seems possible, issue #4 is even less cohesive than previous editions, with stories broken up by pin-ups, surreal drawings, and in one case, a brief interruption declaring “death to false witches.” Though some of these feel a little unnecessary, Aidan Cook’s poster of an imprisoned Christ is almost unbearably beautiful, and Rafel Delalande’s illustration of Mocata from Hammer’s The Devil Rides Out is worth the price of admission alone. The stories follow their own internal logic, rather than adhering to a conventional narrative structure. This, for the most part, is all part of the fun, though the stories are of such varying quality that it makes the issue a little inconsistent. 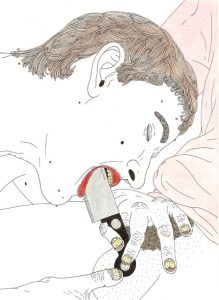 Atomic’s contribution, Tales of the High Priest, gets the issue off to a promising start, telling the story of a Christian priest who, after meeting a group of Satanists, undergoes a conversion experience to the church of Satan. This story serves as a good introduction to the comic as a whole, introducing the reader to the main ideas that dominate the series – that God and Satan are mythological constructs to be found within, rather than without.

Another highlight is Dead Boys by James Unsworth. With shades of Nekromantik, Unsworth presents a wordless, dream-like journey through a world filled with necrophilic gay couples, each more grotesque than the last. Though the story is extremely perverse and transgressive, it also possesses a kind of grubby beauty, exploring the rather off-putting idea that, whether we like it or not, we’re all nothing more than lumps of meat. 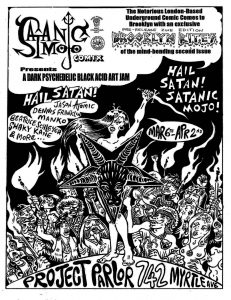 LaughingIndio and Nic Grey also offer interesting contributions to the issue, while stories such as Let Satan Fuck Your Exit Wound add to the dark, transgressive tone.

Overall, Satanic Mojo #4 is an ugly, strange little comic book, filled with poisonous invective against organised religion and the patriarchal society in which we live. While many readers will find this far too disturbing to be enjoyable, for those who are drawn to Satanism and the Dark Arts, Satanic Mojo #4 is absolutely delicious.