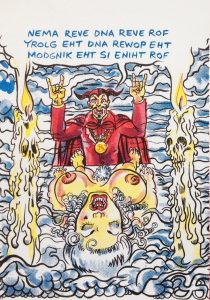 To the uninitiated, Satanic Mojo is a multi-platform art project that incorporates comics, club nights and live performances. Summoned from the mind of punk artist Jason Atomic, the project is created by a collective of writers and artists, all drawing on ideas of Satanism and the occult, as well as 1970s psychedelia. The name is taken from a particularly potent batch of black LSD, one that supposedly created visions that were intense and apocalyptic, and that should give you some idea about the tone of the comic. As such, Satanic Mojo #3 is a surreal and heady mix of voices and styles, all clamouring for attention. It is dark and disorientating, producing the effect of a hallucinogenic drug trip. Basically, if you like your comics straightforward and easy to stomach, Satanic Mojo isn’t the one for you.

Over the past few years, there has been a renewed interest in witchcraft and Satanism, possibly as a result of the increasing tensions of the warring Abrahamic religions. The same thing happened in the 60s and 70s, and Satanic Mojo clearly draws on this time period as a source of inspiration. The writers displayed here have all clearly done their research, imbuing their stories with the underground style associated with the period.

But judging it purely as a comic, Satanic Mojo #3 is only partly successful. Stories are often one or two pages long, meaning that there just isn’t enough for the reader to immerse themselves in. And yet to look at it this way is to miss all the fun that Satanic Mojo has to offer. The joy of the comic isn’t in its structure or its narrative logic, but in the feeling that it evokes. Reading it cover to cover is almost like opening a network of Chinese boxes, each one stranger and more grotesque than the one that precedes it. Though the stories have a certain morbid sense of humour, the comic as a whole is definitely not for the faint of heart, including demons with ophidian genitals, graphic depictions of sex magic, and more apocalyptic references than the Book of Revelation. 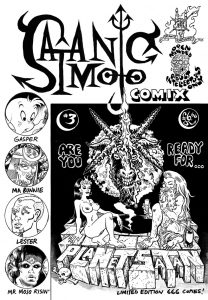 The best story in the collection is ‘The Origin of Lester Starbeard,’ written by Jason Atomic himself. The story tells the history of Lester Starbeard, the leader of a hippy witch-cult in San Francisco. Weaving a narrative that involves the dark arts, Goetic death seals and gay sex-cults, the story is surprisingly moving, adding an emotional heft that is not present in the other stories in the book. The artwork is consistently grotesque throughout, usually creating images that are both disgustingly physical and intensely spiritual. This mix of the sacred and the profane is probably the most artful thing about the book, with artists such as Laughingindio and Dennis Franklin producing strikingly lascivious images.

Satanic Mojo #3 is certainly not a comic for everyone, and will undoubtedly offend and amuse in equal measures. But for readers drawn to the more exploitative, drug-induced brand of occultism on display here, you have my permission to do what thou wilt.