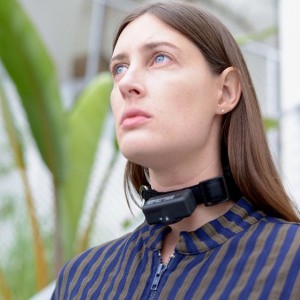 Further to the recent interview we posted with Sun Choke writer/director Ben Cresciman at the Stanley Film Festival, SCREAM also had the pleasure of catching up with two of the leading ladies, Sarah Hagan and Sara Malakul Lane. In Sun Choke Hagan plays Janie, a young woman confined to her home under the “protective” care of Irma (Barbara Crampton). Unable to endure this holistic incarceration, Janie escapes and forms a particularly twisted and unhealthy obsession with the gorgeous and sympathetic Savannah (Malakul Lane). SCREAM’s Howard Gorman spoke to both Sarah(s) to find out exactly how they managed to establish such an extraordinary yet disquieting chemistry on set…

SCREAM: How did the two of you get involved in the project? It’s a particulalrly drastic change for you Sarah.

Sarah Hagan: I actually originally auditioned for Janie and then they brought me back twice to audition for the role of Savannah and then in the end I got a call asking me if I would be up for playing the role of Janie. Janie’s is obviously a much bigger role and much more demanding but they thought I could pull it off so that was kind of how that happened. It’s funny because Sara, who plays Savannah, she auditioned for Janie like five or six times and she got Savannah so it’s been really funny but we both really understand each other’s character.

Sara Malakul Lane: That’s right. I pretty much auditioned for Janie four or five times and it was really interesting to audition for the part and I felt that they liked me but they felt like something was missing and they couldn’t quite figure it out. Finally the director called me up and said they really wanted me for the role of Savannah. At that time the thought hadn’t even crossed my mind so I was surprised. But then when I read with Sarah Hagan as Janie and me as Savannah everything just fell into place and I felt it was a really smart decision on their part.

SCREAM: Barbara Crampton is such a big name, particularly in the world of genre movies, so it must have been such an honour to share so much screen time with her Sarah.

SH: That was amazing. She is just a very wonderful and generous person in real life and then, as an actress, she is very giving and she just brings everything she has got to the role and she really listens and responds and that’s how we were able to really create a good connection together right away.

SCREAM: Did you do much preparation with her, particularly in terms of the holistic healing and yoga scenes?

SH: We kind of took it as we went but we did do a little bit. We had like one day of rehearsal and walking through the house and going through each scene with Ben Cresciman to really get the lay of the land and stuff. Ben also had some kind of yoga instructor who would come in and show me a couple of different poses and stuff like that. But all of that was very briefly and most of it was during the scenes on set and I had never ever actually taken yoga before in my life so I probably should have taken some yoga classes. Barbara is actually a yogi though and she showed me a few things. As far as other research or rehearsal stuff beforehand, Ben gave me a lot of films to watch as references for the mood or how he sees Janie in the world that we were trying to create. He had me watch things like Dogtooth and Repulsion and Antichrist so that was very helpful. He also sent me YouTube video links of actual people taping themselves having seizures which is a very weird thing. I personally have never had a seizure but the videos really helped me understand the physical way that that kind of episode takes place so that I could kind of get into it and really get the right movements down. And apart from that I just tried to figure out how I could make Janie as human as possible. 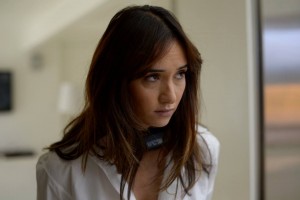 SCREAM: There are quite a lot of surreal, dreamlike scenes. Was that hard to get you head round or was Ben particularly meticulate in explaining just what he wanted from you?

SML: He was very precise sure, especially with the dream sequences. It’s hard as a character appearing in someone else’s dream but he was very specific about what he wanted us all to do there.

SCREAM: The two of you have this peculiar relationship that transcends into something really sinister by the end. Did you plan this crescendo with each other very meticulously or was a lot of it played by ear?

SH: I think we worked most of it out as things went along really but I didn’t keep my distance from her like the characters in the film or anything like that. I mean, we didn’t really hang out while we were on set or anything like that but we were friends on set so I didn’t take the off-camera preparation THAT far I guess.

SCREAM: One particular scene that you must have prepared with each other for hours upon end is a scene with the two of you reciting the exact same dialogue in unison.

SH: Oh, we worked on that A LOT together, trying to get each other’s afflictions down and getting in tune with each other. It was still all prepared on the same day but we did have all of lunch and we spent quite a period of time because they had to set up the whole camera with the whole pool and stuff like that. But we just practised together saying the lines in unison over and over again.

SML: That scene was very hard because the director, Ben, was very specific about how he wanted us to be completely in unison, almost as one person. When we actually got in the pool to do the scene it was really nice and warm and it was hard to stay focused as you start to feel a little sleepy, especially after all those weeks of acting. It was really relaxing in there are we were just like, “Oh my god. We have to remember all these lines and be in synch.”

SCREAM: Did you find it daunting to act out so many scenes of a violent and sexual nature?

SH: Yeah, I’d never done nudity in a movie before or in anything before except for my own personal life. *laughs* And even though I have done that now, I don’t know if that kind of thing will get any easier. It’s kind of daunting and nerve-racking every time because there’s just a group of people standing there, doing their jobs obviously, but you are so vulnerable so it was very scary and anxiety-ridden. But, in the nutshell of it, the movie itself is never about the nudity, it’s just what we see. It’s these people taking a shower or in a bathtub and it’s never really anything you have to hide. That’s why I could understand it all and it’s why I was ok with it.

SML: These things are always going to be a little bit nerve-racking. For me, being naked in front of people is not the hugest deal, I’m not that shy about it. It’s never going to be comfortable and I’m always more concerned about the other person, worrying if they are okay. For this film I felt that it was definitely a necessary part of the storytelling. Everything was laid bare and I think the nakedness was also the general symbolic theme of the movie. Ben certainly made us very comfortable and I was well aware of what was going on. To be honest, I was more scared by the torture scenes and the violent scenes. They were the harder days for me. I don’t want to give too much away but for Sun Choke we did a lot of stuff pretty much for real. I had a lot of cuts on my wrists from one scene and I genuinely was gagging for another scene because you are really in it and I think it’s important just to go all out. The audience will really get the experience if you are really feeling it. There was no safety or anything, we just kind of went for it. After the third or fourth take it becomes really tiring on the body and you think, “Oh shit, what did I get myself into?” But then it’s fun and I guess I’m a little sadistic and I want to feel it rather than having some safety guy standing there going, “Are you ok?” No, I’m not ok, but that’s fine. 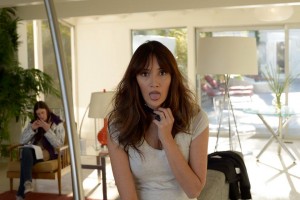 SCREAM: Sarah, you have one particular scene that mixes sex and violence at the same time. That must have been a really tough scene to tackle.

SH: Absolutely, especially as I had never done either one of those. Yeah, that was crazy. It’s like the ultimate challenge. It was like, “Right, we’re actually doing this.” But yeah, I don’t even know what to tell you about that. *laughs*

SCREAM: Sarah, can you tell us a little about another film you have coming out soon called Children?

SH: Yes. That’s mainly with Kate Lyn Sheil and Samantha Jacober and we shot that a couple of years ago. I came out and shot a couple of scene in Idaho for a filmmaker called Jaffe Zinn who I met at a film festival. I loved his movie Magic Valley and he’d seen me in things so he wanted me to play a small role in that film.

SCREAM: And Sara, you’ve got a lot of projects on the horizon too. There’s Pernicious, Cowboys vs Dinosaurs, Shark Lake. But then you have a bit of a switch in genre and will be starring in Kickboxer. How’s that project going?

SML: We have two more weeks of filming for that which we are doing in Mexico City at the end of the month. There’s a great cast there with Dave Bautista and Jean-Claude Van Damme and Gina Carano. I think it’s going to be a really great movie with John Stockwell directing. I loved a lot of his movies so I was really happy that I got to work with him. Also, I feel like the people who are fans of the horror genre and these kinds of movies have all the same fanbase. They all love Kickboxer and shark movies and stuff so I definitely feel like I’m finding a good fanbase.

SCREAM: Thank you both so much for your time Sarah and Sara and the best of luck with Sun Choke and beyond.

SH: Thanks Howard. Have a good one!

SML: It’s been a pleasure, thank you, SCREAM MAGAZINE.

We’d like to thank both Sara(h)s for talking to us and and we’ll leave you with the trailer for Sun Choke. You can also read our review of the film over here: https://www.screamhorrormag.com/sun-choke-film-review/ 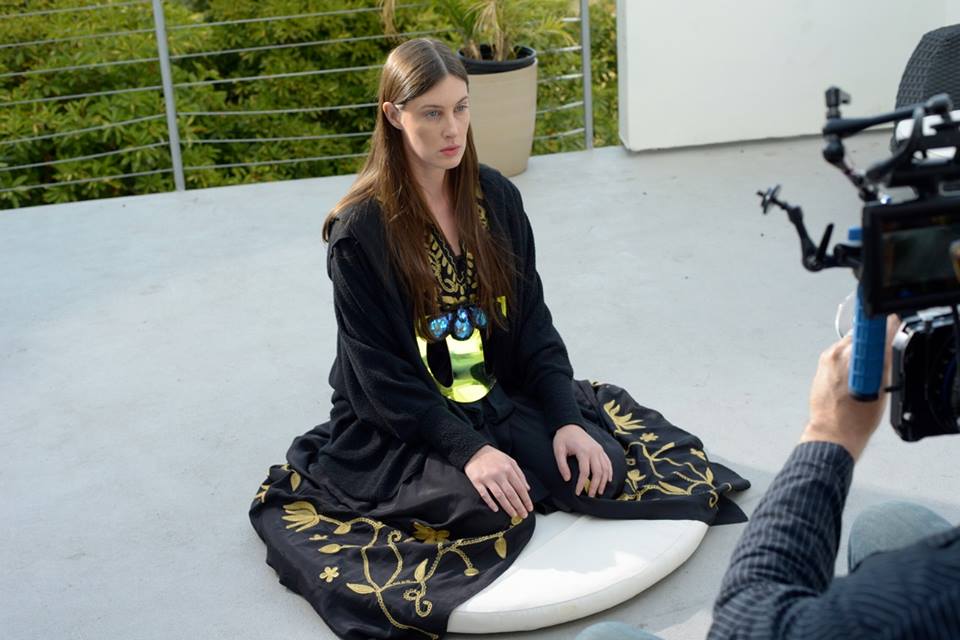