Synopsis:
Christmas Eve 2005 in Holly Brook. A family has been massacred. The only survivor is eight-year-old Michelle. Her entire family has been killed, her siblings beheaded and her mother left for dead.

The only clue is written in blood on the wall. “Santa Took Them”

Ten years later and Michelle has been released from a secure psychiatric hospital after being believed to have been the perpetrator in the massacre.

The uncle she has been sent to live with has been murdered, along with his girlfriend, and Michelle is missing. A chilling message written in blood on the wall. “Santa Took Them!”

Now the hunt is on for Michelle to try and stop her rampage once again. The only question left to answer is, is Michelle really the murderer? 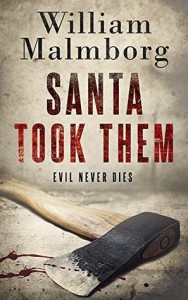 So characters wise in this one, we have a few to mention. There is obviously Michelle, although, she surprisingly doesn’t play as big a part in the story as you may expect. She has obviously suffered terrible tragedy in her short life and I would describe her as a haunted, troubled teenager more than anything. Other teenagers involved in this would be Renee, Hanna and Steve. Steve and Hanna were dating and Steve and Renee are dating now. Renee hates Hanna due to her being his ex and is so paranoid about her that she has people following her and him everywhere to make sure they aren’t meeting up. Steve is in the mix due to his father now owning the house the murders took place in. Hanna is drawn into things because her father was the original investigating officer who turned to drink and ultimately killed himself due to not being able to solve the case.

Dr Samantha Loomis is the doctor who was looking after Michelle when she was in the hospital. She doesn’t believe she killed her family and is on a seemingly personal crusade to make sure people know she is innocent. Together with Detective White. She is on a mission to prove she is right.

As far as the plot goes it’s pretty simple. Or is it? Michelle is nowhere to be seen after her uncle is killed so everyone automatically thinks she is on another rampage and the hunt begins to find her and bring her to justice. William Malmborg never makes things that simple though. I am not going to give anymore away in the plot but I will tell you there are more twists and turns in this story than the biggest roller coaster in the world! Just when you think the story is going in one direction and you have it all figured out, Mr Malmborg pulls the rug from under your feet, wraps you up in it and throws you down a very big hill, until you hit the bottom and fall out with your eyes spinning in your head!

Blind Eye was William Malmborg’s last book and I commented in my review of it, that you can read XXXX, that I missed his signature blood and guts. I missed the gore and the cringe worthy scenes that had you wishing you hadn’t eaten in the previous two days prior to reading his book. Has it returned? I’m very glad to say yes it has. Maybe not in the same abundance as say Jimmy or Text Message but it is definitely there. There are a couple of scenes in this one where you will definitely struggle to keep your dinner down and also a couple where you will struggle to stop your eyes watering imagining the pain. One in particular has stuck in my head since I read it and doesn’t seem to want to go away. This, for me, is the sign of a wonderful storyteller when something from their book sticks in your mind like this. Sometimes it’s wonderfully painted scenes of a wondrous land. Sometimes it’s one of the most painful things you could ever imagine happening to you. William Malmborg is a master of the latter.

Can I be negative for a minute? At times I felt this was running on a bit too long. There were a couple of scenes that I thought could have been a bit shorter. I’m not saying in any way shape or form that they were badly written because they weren’t. They just dragged a little bit. I have a feeling that was more to do with me wanting to get the answers to some of the questions I had about where things were going, but it did slow it down a little bit at times.

The rest of the time, this book travels at one hundred miles an hour. Never take this story for granted. You do need to pay attention if you want to have any chance of figuring it out before the secrets are revealed. I doubt you will though. I knew four times who the main culprit was. I guessed in the end but there is always something thrown into the mix to make you doubt yourself.

I love William Malmborg’s writing. His stories are very easy to read. They flow extremely well and you can tell that he puts his heart and soul into everything he writes. This story proves beyond a shadow of doubt that he has the knack of writing a blood thirsty thriller that is full of the smartest and most intricate and imaginative ideas and plots. It’s not easy to keep your reader guessing right to the very end. He does it expertly in this. Although this is not my favourite Malmborg book, you still got to read it. When you finish it you will sit back, take a big breath and say, yeah that was bloody good!

To summarise: A typically horrific Malmborg horror / thriller filled with blood and guts and non-stop from start to finish!