Nicky Negrón has been a vampire for 25 years. He has his routine set for getting the blood he needs – working in a blood bank and feeding on low-life criminals. He’s a vampire, but a rare individual who didn’t lose his conscience completely. He even visits his widowed wife to watch her and see that she’s well treated by his replacement. Despite being a long time dead he’s still in touch with his humanity, his family from afar, and the habits of his old life.

The story is told in the first person and it’s through that point of view that we get to know Nicky. He gives us his biography, his story, interspersed through the present day events. We learn about family relationships, life growing up in the Bronx, playing baseball, and meeting and courting his wife. These are some of the things that kept him from becoming a merciless bloodsucker. The fondness of the character for these aspects of his life really comes through and makes him a likeable and genuine protagonist. 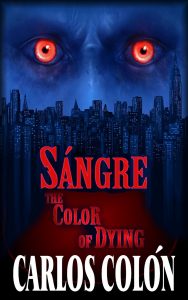 We get his point of view of the vampire life, from blood quality to debunking popular vampire myths. We see the unglamourous struggle it is to be a vampire. His inability to let go of his family and to avoid relationships gets him in lots of trouble.

There are those out there looking to destroy his kind – those who’ve lost loved ones to his kind. Then there is the woman who turned him. She’s powerful, more powerful than most vampires. She ruined his life and she’s back to take his city.

As much of the focus is on Nicky and his journey and relationships, it is a slow burn in parts. It’s a character piece and so there is not as much violence as you might expect. That’s not necessarily a bad thing, as his story and coming to terms with his vampirism is interesting. This is a more human spin on vampirism and it’s definitely worth a read.