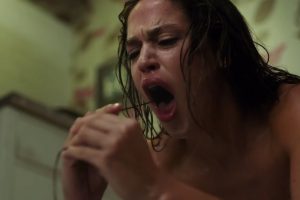 Samara gets back to doing what she does best – crawling through TV screens – in this new poster for Paramount’s upcoming franchise revival Rings.

The third instalment of the studio’s Ring series, which was started in 2002 with Gore Verbinski’s remake of the 1998 J-horror classic, was recently pushed back from its planned Halloween slot until February 3rd, 2017. 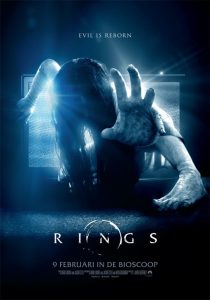 Billed by Paramount as a direct sequel to their last encounter with that cursed videotape in 2005’s The Ring 2, Rings sees Bonnie Morgan (The Devil Inside, Fear Clinic) stepping into the role of Samara, with The Big Bang Theory’s Johnny Galecki continuing his horror reinvention at the head of the film’s cast. They are joined by Scream 4’s Aimee Teegarden, Alex Roe (The 5th Wave) and Laura Wiggins (Dance of the Dead). F. Javier Gutiérrez (Before the Fall) directs the film, which adds a new layer of fear to the established mythology.

A young woman becomes worried about her boyfriend when he explores a dark subculture surrounding a mysterious videotape said to kill the watcher seven days after he has viewed it. She sacrifices herself to save her boyfriend and in doing so makes a horrifying discovery: there is a ‘movie within the movie’ that no one has ever seen before…