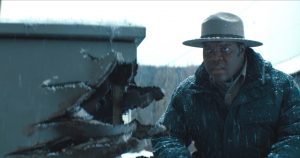 Many of you will most likely have seen Sam Richardson (“Veep”) serve up some priceless comic relief in Amazon’s huge tent-pole sci-fi title, The Future War alongside Chris Pratt, Yvonne Strahovski, J.K. Simmons and Betty Gilpin playing Charlie, a draftee with a PhD in Earth and Atmospheric Sciences. And now, thanks to the stars aligning, UK audiences haven’t got long to wait before getting to savour his comedy chops once again as Werewolves Within, an independent, hilarious whodunit horror film – that he both stars in and produced – releases next week.

Written by Mishna Wolff and helmed by Josh Ruben (Scare Me), this adaptation of the Ubisoft video game of the same name starring Richardson alongside Milana Vayntrub (“This Is Us”), Michaela Watkins (Brittany Runs A Marathon”), Harvey Guillen (What We Do In The Shadow”), Cheyenne Jackson (“30 Rock) and many more revolves around the shenanigans that ensue when a massive blizzard isolates a small Vermont town. The predicament causes simmering resentments to boil over as the quirky and questionable townsfolk are picked off, one by one, by a mysterious creature. It’s up to newly arrived forest ranger Finn (Richardson) and postal worker Cecily (Vayntrub) to do their best to keep the peace and discover the truth behind whoever – or whatever – is terrorising their town.

Hot off the successful US release, Werewolves Within gets a UK release on digital and DVD this 19 July, through Signature, and SCREAM caught up with Richardson to talk about him having quite possibly achieved something that not even Will Smith has yet, maintaining a precarious balance between pure horror and offbeat humour, and his love of old school movie merchandise…

SCREAM: Congratulations on ‘Werewolves Within.’ It must have worked very much in the film’s favour that it ended up releasing at roughly the same time as The Tomorrow War?

SR: I know. I never expected that. It’s truly surreal. I’m sure there are other examples of it happening for people, but for me, it’s pretty remarkable to have this personal indie project where I feel like I have so much ownership of it and at the same time I’m also one of the many moving parts of a huge action movie. I don’t think even Will Smith has done that yet (laughs).

You need to get that on Wikipedia already!

The film’s comedy and the comic timing are impeccable. There’s always been an ongoing debate about whether or not horror and comedy really can go together. Personally, I believe it can and Werewolves Within is testament to that fact. That must have been one of the main factors that drew you to this project, not only as an actor, but as one of the film’s producers?

Well, I was sent the script by Vanishing Angle and Ubisoft to read, to consider playing the part of Finn. I read it, and I thought it had such a great energy, and I love genre to begin with. I love spy movies and horror movies and this was not something that I had done before. So the enter the opportunity to do something in that sort of genre and world. I was excited when I read the script as it was so unique, cool and funny … and suspenseful. I truly couldn’t tell who, or what, the werewolf was going to be so I really thought it was a movie that would strike a chord. Then I talked to Josh (Ruben) who ran me through how he envisioned it and I was on board and I was on board straight away.

Any characters in a whodunit movie need to be diverse and questionable but here they’re all really out there. I’m guessing a lot of their quirkiness was in the script but were you able to bring your own suggestions to the table and play along using bits of improvisation here and there?

A lot of it was already in the script; and the lines were in the sense that the script had drawn an outline of the figures. But then, when everybody came in, they put the colour in it. It was really interesting to see the interpretations of these characters and I feel that the actors really highlighted what was already funny, really bringing life to those things.

As a producer and a character, Finn was there already, but I think I was able to like paint shades on him in relation to the story in general that I thought were interesting and unique.

When it comes to comedy, taking things too far or not taking things far enough can make of break a film. Werewolves Within is very out there so how did you go about keeping just the right balance?

It’s a tricky balance to begin with for comedy, but then ensemble comedy on top of that requires everybody to be on the same page and to compromise a great deal. You may want to go really big but then that may be at the sacrifice of the other actors. And there are so many energies shooting off. which is when things can be at their most precarious. But, in my opinion, I think it works brilliantly and there’s a rhythm and timing to the comedy in a lot of these things that is in the edit but also in the directing and the acting so a lot of these things have to be very precise. So there’s no room to go too far and there’s no room to hold back either.

Coupled with all that rhythm and timing, Josh is a big fan of ’70s and ’80s movies like Jaws and used a lot of wide angle shots that were very common in that era. That must have added more of sense of acting in a play in a theatre, as there are moments when we see virtually the entire cast on screen as the same time? I get the feeling Josh really kept you on your toes with things like this?

You have to be able to hear a pin drop and we had to be very aware of where we were all standing because we were all on very specific marks. It’s a really precise thing and we were also like with one camera.

Josh has cited films like Jaws and Shaun of the Dead as huge inspirations. For me, the film felt like a perfect blend of Agatha Christie, Jaws, The Hateful Eight and Broken Lizard.

Interesting! I’m a big fan of all of those things. I’ve never considered it like Broken Lizard’s things mainly because our characters are specific and nobody is fully telling jokes. Broken Lizard movies are really about a bunch of friends who go out and make fun stuff, breaking the fourth wall a little bit; something we didn’t really do. But yeah, I think those are all good touchstones.

Your character, Finn, is not the most confident person in the work. You get told to “Man up!” and “Grow a pair!” a few times. Is that something you could relate to?

Yeah. (laughs) When you read the script, Finn’s full story arc is the idea that he’s a character who doesn’t seek to be an authority and he lives his life in this sort of passive space.

And then, as he’s now put in charge of people, it’s becomes all about trying to apply that sort of calm passiveness and how people will respect that and others won’t. I wouldn’t say he’s passive and nice just out of fear. He really believes in the power of being nice.

The audience is made aware of Finn’s lack of self-confidence at the beginning of the film through a very unique self-help tape he’s listening too. Where can people get hold of that tape because it’s fantastic?

(Laughs) Balls, balls, balls! I honestly don’t know. We just did that short bit but I guess if there’s a demand for it, maybe we should record the whole thing (laughs).

The town itself was very unique too, with that ’90s themed bar for example. You must have been tempted more than once or twice to take a memento or twp home with you. Surely you kept that hat of yours?

I DID keep my hat and I kept one of the axes, I wanted everything from that bar, even the neon lights. I’m a big pinball fan too so you can imagine! I really wanted those. Hopefully, one day I’ll be big enough to be in a film that gets its own pinball machine. I could definitely see The Tomorrow War or even Werewolves Within as great pinball machines.

It’s a shame we don’t see the old type of merchandise anymore. For The Tomorrow War, I could imagine action figures and a video game and a cartoon, but that doesn’t really exist anymore.

Talking of video games, I’ll leave you with this question: ‘Werewolves Within’ was adapted from a virtual reality video game but if you could turn things around, what film would you like to see turned into a VR game?

This is an incredibly practical answer, but I think I would enjoy it. Robocop would be a great VR game because he essentially is a VR guy. Maybe it’s not a funny answer but I would love a Robocop video game, so we need to try and make that happen. Ubisoft! Let’s work on this!

But, in the meantime, we’ll leave you with a taste of Beaverfield in the UK trailer:

Werewolves Within is available on Amazon DVD and iTunes from 19th July.