It’s perhaps surprising we haven’t seen more horror films set around the Bermuda Triangle, the expanse of Atlantic East of Florida known for inexplicable disappearances of planes and ships. Skydance Productions has been developing a script based on the mysteries of the area for a while now however, and now seem to have found a director for the project. That director’s name? Sam freakin’ Raimi!

Yup, as reported by THR, the Evil Dead creator and all-round horror hero is currently in final talks to hop aboard the film, which was scripted by Doug Miro and Carlo Bernard, the writing duo behind The Sorcerer’s Apprentice and Legendary’s The Great Wall. 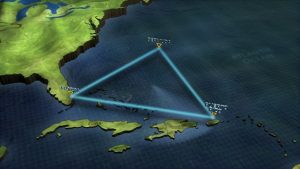 If the idea of a Bermuda Triangle film tickles your pickle, then it’s a great time to be alive, because in addition to Skydance’s film, both Universal and Warner Bros. are also working on films featuring stories about the infamous patch of ocean. With the three films inevitably set to find themselves in competition with each other, the respective companies are keeping their scripts closely guarded secrets. Skydance in fact, did not send any scripts out; prospective directors were asked to come to their offices just to read it.

With theories regarding the Bermuda Triangle ranging from extra-terrestrial involvement to the paranormal and even the effects of leftover technology from the mythical lost kingdom of Atlantis, it is anyone’s guess as to what direction the films will take. All we know is that with Raimi onboard, Skydance’s is the one piquing our interest.