After reading Ryan C. Thomas’s shocking (even to a jaded horror reviewer) The Summer I Died, I was excited to see his take on a creature feature with salticidae, better known as jumping spiders. The story begins on a remote mountainside in the Congo with a mining expedition led by wealthy heiress Janet Beaudette. As the team of miners she leads begin blasting in search of gold deposits within the mountain, they release giant jumping spiders that had been encased within the mountain. We are then introduced to a number of groups in the immediate area: Janet and her employee Gellis; photographer Derek, journalist Jack and their guide Banga; local tribesman Musa and son Shumba; and rebel militia forces. We follow their quests for survival.

Despite the near immediate arrival of the giant spiders, I found that there wasn’t a huge amount of tension. Although the spiders are incredibly powerful and to have a run in with them means death, they lacked the creep factor than you get from smaller but equally deadly versions. You see them coming and you run. There is no danger from the unseen, which I sorely missed.  Particularly effective though, was the very chilling and vivid scene depicting the remains of the spiders’ battle with the river hippos. I was also impressed with the scene where Janet and Gellis stumbled across the spiders nest. The book is gruesome in places but never reaches the visceral violence found in The Summer I Died. The kills from the spiders were all the same and became somewhat bland after the first few incidents. Despite the detailed descriptions of the spiders throughout the book, mandibles, fangs and poison galore, the size of them just negated any scares for me. 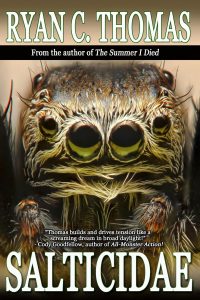 The guides and tribesman were the most interesting characters in the book, with engaging stories and life experiences. Janet and her spoiled, elitist/racist attitude wore thin, and the wise-cracking journalists seemed almost like caricatures and were hard to identify with on a human level. The theme about the villainous white man exploiting nature and resources is a little cliché, but not untrue. The discussions of the militia and the political situation that formed the backdrop of the story were more interesting. The atrocities that the GRC rebel militia and other groups perpetrate on native tribes seemed much worse than the spiders.

The majority of the book involved people running from the spiders on the mountain or the surrounding jungle. It quickly became all too familiar and just got a bit stale. I did enjoy the finale when all the separate groups we’d been reading about finally ran into each other for the climax. Sorry to say that on the whole, I can’t really recommend this.