Religion can be a beautiful and disquieting thing, both when viewed from the outside and from within its sanctified grasp. And few films capture the hysterical highs and gut-wrenching lows quite as successfully as Saint Maud, the debut feature from writer-director Rose Glass.

The film follows Maud (Morfydd Clark), a former NHS nurse now working for a private palliative care company. Her latest charge is Amanda (Jennifer Ehle), a renowned choreographer in the grips of a debilitating terminal disease. After seemingly receiving a sign from God, the pious Maud decides it’s her duty to save Amanda’s soul⁠—and she’s determined to do it with or without Amanda’s consent.

There are no easy answers in Saint Maud. It’s implied that the horrifying incident that caused Maud to leave the NHS may have been her fault, but it’s never confirmed. It’s suggested that her connection with God might be a genuine spiritual experience, but then again, maybe it’s all in her head. And if her God is real and really speaking to her, is He truly a force for good⁠—or is there something more sinister lurking behind that discomforting voice? 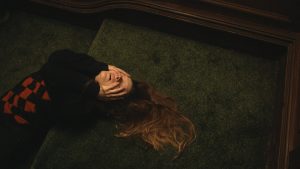 These questions unfurl with slow, deliberate ease as the film progresses. Rose’s confident lens and Clark’s powerful performance combine to make us unsettlingly complicit in Maud’s mania, forcing us to sympathise with her even as her judgemental attitude descends into dangerous behaviour. The clever use of darkness and unconventional camera angles make Maud’s isolation and inner turmoil weigh heavy on the screen, while some superb editing choices create quick-flash scares that leave troubling scars.

Saint Maud is cause for ecstasy and terror, just like the religious fervour it revolves around. Tender and traumatic in turn, it lingers long on the mind after it’s over.