We remember hearing about The Forest of the Lost Souls (A Floresta das Almas Perdidas) at the end of 2015, so it’s great to see the film back on our radar. There is some good news: we have a brand new trailer to share with you, which is just as beautiful and unusual as the last, but we also have some bad. The film has not yet been given UK or US distribution! Grr. It is, however, screening at the Fantasporto International Film Festival in Portugal in February and the Cameroon International Film Festival in April. So, if you’re in Africa or Portugal you can check out the film when it premieres in these countries. 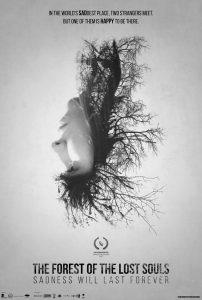 Synopsis:
Ricardo (Jorge Mota) is a sad old man, who gave up on life when his older daughter, Irene (Lilia Lopes), took her life in a romantic pact gone wrong in the glacier lake that rests hidden deep in the forest. Carolina (Daniela Love) is an eccentric, unstable young girl who finds all things related to death are fun.

As bumping into each other puts them off killing themselves, they decide to go for a walk to discover The Forest of the Lost Souls and see what they will find. As they walk deeper into the woods, they get to know each other and become friends: But one of them is not being honest; one of them is a dark and horrible person.

The Forest of the Lost Souls has been written and directed by Portuguese film-maker Jose Pedro Lopes and stars Daniela Love, Jorge Mota and Mafalda Banquart.

Check out the brand new poster below (above) and trailer (below), which both showcase the film’s black-and-white beauty and bizarre blend of sadness, suicide and slashers.