Synopsis:
The evil spirits of Ringu and Ju-On curses are forced to battle when an exorcist deems it the only way to save two girls’ lives. 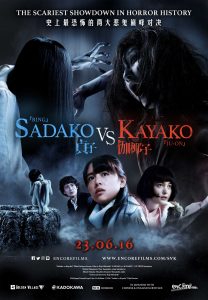 It’s the fight to end all fights and the film we never realised we wanted, but here we are with a film that sees two infamous Japanese curses fight each other to the death. It’s ludicrous, nonsensical and quite honestly, hilarious, but if you go along for the vengeful ride you might have a little fun. Warning: this is not to be taken seriously.

Sadako vs Kayako is an extremely middle-of-the-road film, because you can’t call it a good one – because, it’s pretty awful – but you can commend its drive and interest in doing whatever the hell it wants. There is an overwhelming sense of self-awareness within the film as it fuses together the Ju-On and Ringu curses in a sort of sequel tie-in feature. When the film re-introduces the curses it does so with its tongue firmly in its cheek. Professor Morishige delivers a lecture on Japanese myths and an early shot places the haunted house from Ju-On and the videotape from Ringu side-by-side, preparing us for the fight we’re eager to see take place. This film is brazenly knowing and isn’t afraid to laugh at itself. Morishige becomes the centre of the comedy as his obsession with Sadako leads him to watch the videotape, because he wants to see her. He, like us, is a fan of Sadako and through him, the film is able to place the events in context – he describes how the tape would probably be on the internet if it was real – and showcase its awareness of the films and have a bit of fun with the audience. With Batman and Superman’s battle being ever so serious, perhaps it’s a good idea for Sadako and Kayako’s fight to be a little lighter.

There is an overwhelming sense of melodrama present when Suzuka (Tina Tamashiro) watches the tape that renders everything hilarious, because she notices that her BFF isn’t watching it with her. “Dammit, Yuri!” It almost feels like a slapstick comedy. However, when Suzuka gets the infamous call from Sadako warning her that she has 2 days to live, it’s as creepy as ever. Sadako herself is terrifying, but with this now being the 7th Ringu film – not including the USA’s Ring series and its spirit Samara – she’s losing her touch, I’m afraid. To really elevate this film above other horror-comedies it needed to deliver a few skin-prickling scares to balance out the hilarity, but it does not succeed in doing so. It’s all just too funny and not all of the comedy is intentional. The little Ju-on boy is back with his cat in his mouth apparently, because he spends the entire film meowing. Which was odd, I can’t lie. Also, the film itself is far too polished and should have opted for a grimier, greyer colour palette like a couple of its predecessors. Yes this is a comedy and it’s great that it didn’t take itself too seriously, but it didn’t have to entirely refrain from crafting an unsettling atmosphere and a little bit of eerie never hurt anybody.

Sadako and Kayako take a long time to get to the moment we’re all eager to see and, unsurprisingly, it’s utterly barmy. The fight – if you can even call it that – features some of the slowest combat I’ve ever seen. They’re ghosts, they’re not fast and they have no skills in fighting per se. Sadako terrifies her victims to death with her eye and Kayako isn’t exactly known for strength. The image of Kayako crushing Sadako’s tape is a great image, but we’ve seen that in the trailer. It’s a truly bizarre few moments, but it’s impossible to take your eyes off the screen because of this. If anything, you’ll never forget Sadako vs Kayako, but that’s not necessarily a good thing. It’s sad to see the franchise come to this point in their storytelling, but Sadako 3D proved that anything is possible and this one is, at least, an improvement. 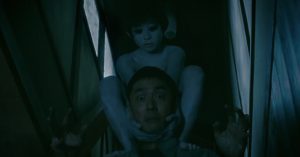 All in all, Sadako vs Kayako is unabashedly a great time and lot of fun, but it misses the mark on delivering the frights. It’s a film lead by the promise of a hilarious gimmick and it works, but it’s nothing special. If you’re after laughs, then you could do worse and fans of the two franchises should find enough to enjoy in this bizarre addition in the respective ghostly franchises.