The writer and director of the horror western Bone Tomahawk, S. Craig Zahler, is teaming up with writer Charles Band (Puppet Master I, II and III) to reboot the cult classic Puppet Master from 1989. Currently titled Pupper Master: The Littlest Reich, the reboot promises to capture everything that made the original film so wonderful. So, expect a heavy dose of gory, inventive murders accompanied by a healthy portion of dark comedy. 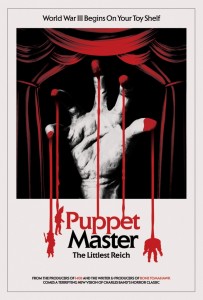 There is currently no director attached to the project, but Band himself will be an executive producer. The film is set to mark the beginning of a new franchise with the idea to expand on the characters and their universe. It will be interesting to see who is picked up to direct, but with a great writer at the helm, at least we know the script is currently resting in good hands and that’s a start.

Synopsis:
A recently divorced young man who discovers a mint condition Blade doll in his deceased brother’s closet and plans to sell the toy at a convention in Oregon celebrating the 30th anniversary of the infamous Toulon Murders.  All hell breaks loose at the Postville Lodge during the auction when a strange force animates all of the various puppets throughout the convention as they go on a bloody killing spree.