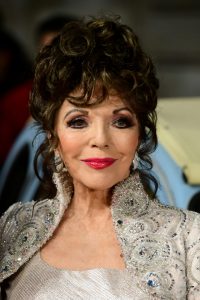 It is being reported that Ryan Murphy is to add Joan Collins to the cast of the upcoming futuristic eighth season of American Horror Story. The showrunner spoke with THR who described him as:

“In classic Murphy fashion, [he] reveals he’s “throwing in Joan Collins” and is “interested” in Anjelica Huston”.

Hopefully the throwing is not literal.

Collins and Huston would be great additions to the show – Huston has, of course, played the iconic roles of Morticia Adams and the Grand High Witch, and Collins has featured in a ton of films and TV series since she started her acting career in the ’50s.

They will join the already stellar cast of Kathy Bates, Sarah Paulson and Evan Peters. American Horror Story Season 8 will possibly be called Radioactive and will air this autumn.