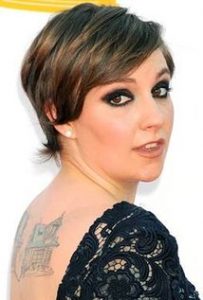 Showrunner Ryan Murphy took to Twitter today to announce the news that Girls star Lena Dunham (pictured right) has joined the cast of American Horror Story season 7. There has been no confirmation of what role she will play; whether it will be a fleeting contribution or a lengthier appearance.

We have a had a few teasing insights into the new season of FX’s hit show, but we are expecting a reveal of the theme on 21st July at SDCC. Not long now! We know it’s something to do with last year’s presidential election, but Ryan Murphy’s bee clue from yesterday basically throws that out of the window. Bees? The Election? Your guess is as good as ours at this stage.