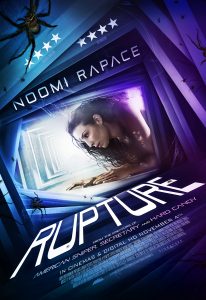 A woman fights to escape from a mysterious group of people that have kidnapped he, but her situation becomes increasingly traumatic as the truth about her capture slowly becomes apparent.

Delightful visuals and a strong cast are enough to get you through to the end of Rupture, but its themes and observations about life, evolution and humanity are familiar, lacking the originality needed to propel this sci-fi flick into the stratosphere.

The film raises thoughtful questions about what it is to be human; emotions, feelings, love and all that lark, but many films have explored these concepts far deeper and more effectively. Rupture lacks the impact, characterisation and eventual shock of Alex Garland’s directorial debut Ex Machina, which explored similar themes surrounding the future of humanity. Although handled more subtly, with Rupture choosing to shroud its story in a veil of initial mystery, the film’s eventual revelation will warrant an eyebrow raise but nothing more. We’ll be equally as unnerved as Renee who’s tied to a table, begging to know what the people want from her. Noomi Rapace is expectedly exceptional as the leading lady, embodying the perfect amount of likeability and courage to ensure that we stick by this heroine until the bitter end.

There are similarities to Pascal Laugier’s Martyrs resting in Renee’s capture and suggested torture but, of course, Rupture is far less harrowing and without the gut-punch of Martyrs. Renee’s desperation and loneliness is certainly deserving of comparison to Anna’s and the film’s beginning very much hints that Renee is going to be put through a similar hell. However, Rupture’s plot steers away from Martyrs – thankfully, because the last thing we need is a Martyrs rip-off – and, instead, follows a route more similar to Invasion of the Body Snatchers than French extremity. It’s a well thought-out blend of shock cinema and sci-fi, but neither side of the film is perfect. The shocking side is without the necessary high level of intensity and the sci-fi aspect is under-developed, suffering from a clunky script that ultimately tries to do too much.

There is a certainly interesting premise here, but when the film’s layers are peeled away and the truth about Renee’s (Noomi Rapace) capture is exposed, Rupture’s flaws are revealed alongside it. The film becomes convoluted as it tries to conclude and end with a neat little bow on its head. It becomes unclear what the real motivations of her captors were, leaving you with an ending that feels rushed and incomplete. It’s a strange “twist” if you can call it that, but there is no real energy or spark behind the explanation. It’s all extremely silly and a little bit too unbelievable, with the film not entirely managing to convince, but deserving praise for a few bold visual splashes. 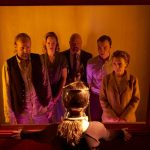 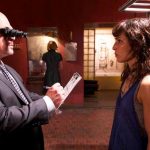 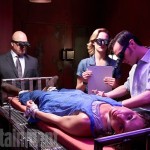 The whole of Rupture may not be greater than the sum of its parts, but some parts of the film will impress. Rupture is definitely not a waste of time to watch and delivers an overall air of mystery that will keep you gripped. You’ll wonder what on earth is going on and Rupture does well at drip-feeding you information to keep you involved, even if some of its lines of dialogue feel slightly forced and deliberately nonsensical. Karim Hussain’s cinematography is gorgeous, making the film an absolute delight to watch. The screen is dominating by invasive oranges and reds; the harsh and contrasting colours create an uncomfortably attractive world that is claustrophobic, but bursting with an intensity that the rest of the film is without.

You’ll be left unfulfilled when the credits role, being left to whisper a simple “what now?” and wondering if the film you really want to see is the one that begins as this one ends. It leaves a lot of frustratingly unanswered questions, perhaps to leave the door open for a sequel or let the audience unpick the mystery fully ourselves. Either way, you will walk away from Rupture confused, disappointed and only mildly entertained.