Rubber Underdogs from the 80s: When Hollywood practiced Safe FX

In a CGI-laden film world, one can often forget the days of old, where actors playing iconic monsters shed pounds in sweat-drenched rubber suits—monsters that held the power to instill memorable and horrific imagery into the minds of horror fans for decades to come.  Despite a newer generation becoming accustomed to all things computers, there are the old schoolers who prefer polyurethane over pixels and the blood-drenched films of the 80s, where no doubt movie sets were fall risks for those not careful where they stepped. 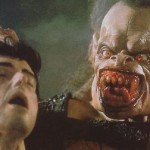 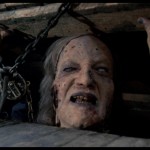 Surely the actors who portrayed such iconic beasts as Alien, Pumpkinhead, Predator, and of course, Godzilla, paid their dues in the heated and heavy skins.  But what of the cult-like underdogs from the 80s?  Join us as we take a look at some of those suits left standing just out of reach of the spotlight, though loved by the underground.

The word zombie is such a household term anymore, as is the chanting for “Brains!” –a proposed diet for the undead.  But the one who coined the utterance is often the most overlooked walker of them all:  Tarman.  By and large, film zombies are normally actors covered in prosthetics and grease paint.  But RETURN OF THE LIVING DEAD’s Tarman took zombie godfather, George Romero’s rotting horrors to a different level.  Tarman’s disjointed swagger, as well as his hunger for brains over good old fashioned flesh, set a new trend for those fresh from the grave for years to come.  Not only was the Tarman actor in a full suit, the head piece was robotized to give that extra excitedly animated two-word declaration:  “More brains!”

When author Clive Barker began his rise to horror fiction fame, he gave us RAWHEAD REX—a demigod summoned accidently by a local farmer straight from the soil of Ireland.  While Barker clearly holds his own in creating horror literature, the film and the hokey suit were less than stellar.  Rawhead Rex resembled a rabid ape with a mohawk mane dressed in medieval garb with a gaping maw forever stuck in a double-Big Mac gnawing position.  Judging by the memorable costume, I would assume the actor playing the part was shown great mercy, as it looked like suiting up took no time at all.

Fortunately for Clive Barker, he was able to fully redeem himself when only one year later, HELLRAISER was released.  What RAWHEAD REX lacked in both content and costume, HELLRAISER made up for in cenobites, puzzle boxes, plenty o’ flesh, and “Uncle Frank.”  The resurrection of Uncle Frank brought us through varying stages of regeneration.  The full body suit was that of a skinless man, revealing a glistening entanglement of muscle and sinew.  The entire movie dealt with pain, and the wet look of the muscle suit was a constant reminder that the poor guy was skinless.  Ouch!  And here I complain for days when burning my finger on the oven. 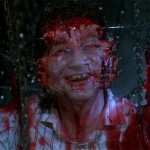 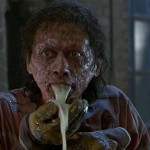 What Vincent Price started in THE FLY certainly ended a bit messier in Cronenberg’s 80s remake, as scientist Seth Brundle’s transformation progressed to the point of a bumpy mass of fleshy oatmeal just prior to going into full puppeteered Brundlefly mode.  Actor Jeff Goldblum sat patiently, as five to six hours would go by in preparation for different stages as “Brundlefly,” from simple prosthetics to full appliances, and ultimately a full body rubber suit so weighted if the poor creature did sprout his insect wings he’d get less air than a bloated hen full of magnets standing on a refrigerator…it was heavy.

If any horror fan ever be caught uttering the words “Evil Dead?  Haven’t seen it,” they would no doubt receive the pummeling of their lives from torch-wielding fans proclaiming “blasphemy.”  Few horror franchises have united fans of the genre quite like Sam Raimi’s EVIL DEAD—arguably the most influential independent horror film deemed as a favorite by horror fanatics the world over.  Though the original film left many sleepless for days with a knotted stomach and loss of appetite, it was the mixed humor and gore of EVIL DEAD II that brought the sequel to the masses.  And leading that pack of deadites to a new audience was Henrietta—the possessed, obese, elderly woman bent on cleaning her cabin of humans.  However, under that cellulitic enormity of foam latex, Henrietta wasn’t a female at all.  In an effort to both include his little brother and torment him, director Sam Raimi put younger sibling, Ted, through the tortuous process of full body and head casting in order to don the heavy latex suit for the film.  Ted Raimi’s experience within the deadite costume was likened to that of sweltering in a sauna while dressed for winter.  Makeup artist, Greg Nicotero often drained the costume of sweat, filling Dixie cups with the evidence of Raimi’s arduous work.  Yes, disgusting.  I’ll just leave that visual for you right here.

Though the 80s will never be replicated, thankfully the use of latex is not completely lost.  While a day may come that a visit to a movie set will reveal a floor littered with computer cables rather than Karo syrup, walls lined with office desks, monitors, and keyboards rather than costumes, and the makeup department coated in cobwebs rather than prosthetics, grease paint, and plaster—may we always remember the 80s and a world filled with polyurethane predators.