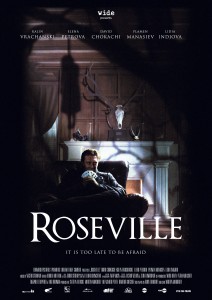 Synopsis:
It’s 1985 and group of people inhabit an isolated mountain hut called Roseville. Mysterious forces manifest themselves in the form of disturbing nightmares and strange events begin to occur that turn this wilderness getaway into a deadly haven for a dangerous entity.

Shot in three weeks during 2013 and featuring a cast that includes some of Bulgaria’s hottest acting talent, ROSEVILLE professes to be the first psycho-thriller that the country has produced. It certainly impressed in its native country’s film awards, bagging both the Best Actor and Best Actress gongs for Plamen Manassiev and Lidiya Indzhova respectively. Perhaps these accolades don’t hold that much weight outside the borders of this South-Eastern European country whose film industry could best be described as weak, but it’s worth emphasising that director Martin Makariev – with a background in TV and commercials, has created a noble debut feature.

Beginning with the interview of a former Major who worked the case as well as some authentically reproduced archive footage, ROSEVILLE piques your curiosity immediately. After it details how the film is an artistic interpretation based on the material evidence found in the mountain hut, we’re transported back to 1985 and the journey of newlyweds Vasko (Kalin Vrachanski) and Nadya (Indzhova) into the dense Bulgarian forest for their honeymoon where they acquaint themselves with resort owner George (Manassiev) and his friend Dora (Elena Petrova).
Our initial group of four soon becomes five with the arrival of George’s self-assured Bostonian friend Steven (David Chokachi), and also signals a change in language for the movie as its native tongue makes way for (predominant) English – seemingly to appease to the arrival of Steven. As the group settle down for the night, fog cloaks this aged establishment, and a sense of atmospheric unease casts its shadow over the place leading the inhabitants on a journey of terror.

With its oak panelled walls, the residence where ROSEVILLE is set immediately creates the vibe of classic horror. Added to this the secluded nature of the location engulfed in a dense and foreboding forest, and we have a perfect base from which to create a memorable scare story – and for the most part ROSEVILLE succeeds admirably. All four Bulgarian actors excel in their roles, easily elevating the film from the generic DTV fodder it could be mistaken for, while the inclusion of Chokachi as the lone American is a sensible ploy to broaden the films appeal.

It doesn’t get everything right – it’s at least 30 minutes too long, and while we benefit from dense and detailed characterisation there are a couple of moments when the pace crawls somewhat and it becomes a little laboured. It’s a minor gripe though, and one that shouldn’t cloud what is an impressive production from a country with a diminutive film industry. A relentlessly eerie and unsettling picture, with roots firmly entrenched in a golden age of horror, ROSEVILLE is a worthy addition to a growing roster of quality European horror.