It’s a massive shame that disappointing box office, lack of backing and other industry bullshit prevented Guillermo del Toro from delivering another Hellboy film with Ron Perlman in the lead. The blow was softened somewhat however, with the sudden announcement earlier this year that a reboot was on the way with Brit horror hero Neil Marshall taking the directorial reins, and Stranger Things’ David Harbour in the titular role.

Since then, inevitable rumours have circulated that Perlman would appear in a cameo in the film and this week, the actor responded to one such enquiry on Twitter with a swift and wholly unambiguous response. 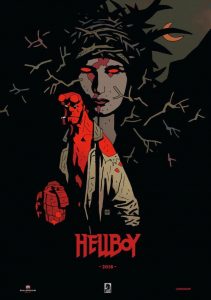 When asked by a fan about the possibility of a cameo in the new film, Perlman replied:

“When Hellboy freezes over.”

Ian McShane, we found out this week, will star opposite Harbour as Professor Broom in Hellboy: Rise of the Blood Queen, which is said to be a return to the darker, more violent material found in the comics.

The film will be released sometime in 2018.