Co-written by the late George A. Romero and Daniel Kraus, The Living Dead will bring Romero’s zombie saga into the world of print on August 4th—and an audiobook version is also coming our way. What’s more, Day of the Dead’s Lori Cardille (pictured above) is among the voice cast! 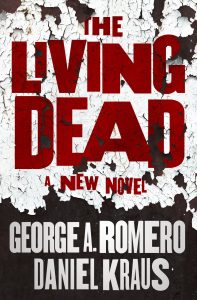 The Living Dead sees a John Doe rising from the slab just as he is being vivisected—leading to a global nightmare beyond compression. Spread across three separate time periods, allowing us to follow along as the zombie plague explodes, endures, and begins to radically change, the 656-page novel combines Romero’s biting social commentary with Kraus’s gift for the beautiful and the grotesque.

Bruce Davidson (The Lords of Salem) will also lend his voice to the 18-hour audiobook, which will be released on the same day as the book.