Romero’s Road of the Dead WILL be Made 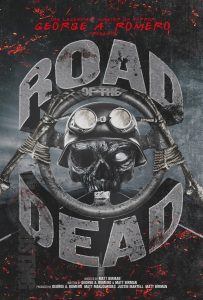 On Sunday we lost one of the most important filmmakers of the last 50 years. At the time of his death, the Godfather of the Dead George A. Romero had some unfinished business with his most famous creations but thankfully, it looks as though it won’t remain that way. Romero had been developing Road of the Dead with frequent collaborator/stunt coordinator/co-writer Matt Birman, who says that, come hell or high water, the film will be made.

“I will stop at nothing to get [Road of the Dead] made,” Birman told IndieWire following Romero’s passing. “For him and with him. Road of the Dead now becomes a legacy film. We won’t only be making the film for him, it will also be with him. He will be by my side and in my ear for the rest of my career, I have no doubt.”

Birman, who is currently at the Fantasia Film Festival in Montreal seeking funding for the film, added: “[George] felt we were on our way to a greenlight, and I still do.”

Birman – a second unit director on Land of the Dead as well as Diary… and Survival… – will direct Road of the Dead, which is set on an island haven for rich folk, where a corrupt despot stages drag races using tinkered-with zombies as the drivers.

“So it’s a demolition derby with zombies at the wheels, and of course the shit hits the fan in other ways,” Romero said a couple of weeks back. “This one is really almost a comedy, though it’s got scares and spooky moments and all that. It’s more about suspense than blood. While there is gore, it’s not overt; there are no big, operatic sequences where people get torn apart. There’s slapstick in it, but it’s mostly stunts; it’s quite different.” He added: “It’s really The Fast and the Furious with zombies.”