James is a young man lost. He hangs out in graveyards, apparently mourning the loss of his true love, Jane, works privately on his songs (Cheesecake of Love is a future classic, surely) and gets regular beatings from local thug Bobby. He is searching for his place in the world; a quiet loner seemingly victimised by the cruelty of society. In director Jeff Frumess’ strange, melancholy horror weirdy (his feature debut) however, little is what it seems. 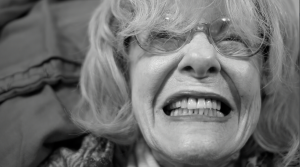 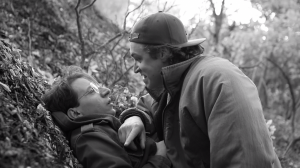 By the end of the first act, it seems we have fallen foul of a ruse, as we find out that Jane was not James’ lover but his victim; while a series of scenes hint increasingly that he is a stalker, the fact is driven home when we enter his room, in a disturbing scene in which he gets far too intimate with a piece of fruit while staring at his walls, covered top to bottom with photos and sketches of Jane. It is a troubling (if blackly comic) moment, made all the more so by the fact that James has thus far been the focus of our sympathies. And we do sympathise, thanks to a charmingly askew performance by Anthony Malchar, in his first screen credit. Initially playing James as a near-caricature of the likeable if slightly pathetic loser, Malchar breathes pained anguish and wide-eyed desperation into the character, who is revealed to be a complicated fellow indeed. We see his sweet side, as he cares for his elderly Grandma, and we also come to realise that he has likely had no example on how to approach any kind of meaningful relationship. His only friend seems to be his eccentric Uncle Elmo, who teaches him that you should always take what you want in life. He is talking in terms of love, but literalises the point with his pride that he just stole a box of chocolates from the shop. Following the initial revelation concerning James’ relationship with Jane, the plot has plenty more emotional twists and turns to navigate before it reaches its conclusion, taking as it does a somewhat extreme example to explore the pain and difficulties of love. 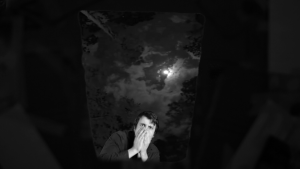 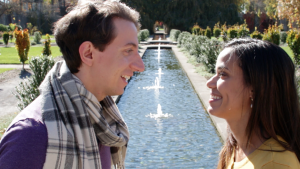 Romeo’s Distress (a title nodding presumably not to the song by death-punk legends Christian Death, but to Shakespeare’s classic tragedy, from which a couple of key plot points are lifted and tweeked) is shot predominantly in black and white, with almost comically colourful interludes of James’ imagined version of his relationship with Jane. The monochrome that dominates allows for some overtly gothic imagery, most evident in the graveyard scenes that bookend the film, as well as the use of shadow during the oppressive later scenes in which James faces Jane’s unforgiving, vengeance-seeking father (low-key horror regular Jeffrey Alan Solomen, giving a jarring, vicious performance). For all its Shakespearean influence and gothic sensibilities however, Frumess is careful to keep his film’s weirder elements front and centre. Scenes of James going about his daily life recall early John Waters, while the stilted timidity with which our flawed hero conducts himself gives some overlap with the film’s comic approach and that of last year’s demented festival hit, The Greasy Strangler. Close-ups of people chewing food and forays into James’ mind threaten to cause acute discomfort, and sit with a number of moments designed for unease. 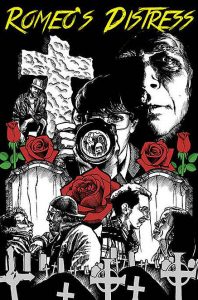 There’s something of a settling-in period with the film, but as it begins to show its hand, it too draws you in. The comedy in the opening scenes (including the unveiling of Cheesecake of Love) sometimes seems as though it’s aiming a little too keenly for ‘random’, and there is the threat that James will amount to little more than that geeky caricature. Again though, we should not be fooled, as the film’s comic tone shows itself to be remarkably consistent and, as already discussed, there is far more to James than meets the eye.

An independent venture in the truest sense (it was shot over 15 months by a two-man crew, with a barely-there budget), Romeo’s Distress mixes more highbrow influences with an idiosyncratic, almost mischievous oddness and, like its troubled protagonist, walks its own path, unswayed by more ‘respectable’ trends. Atmospherically dense, gleefully oddball and relentlessly unnerving, Frumess’ micro-budget oddity could, with a little wind behind it, become one of the breakout festival hits of 2017.