The Rock Still Hoping for Big Trouble with Carpenter Remake

It was announced last year that Dwayne ‘The Rock’ Johnson was set to produce and star in a remake of John Carpenter’s 1986 fantasy horror adventure Big Trouble in Little China. Since then, when Johnson stated that he was gunning for some involvement from Carpenter, all’s gone a little quiet on the project. In a recent interview however, Johnson insists the film is still on the cards. 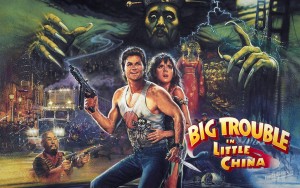 He may be right about that but I’ve gotta say, I’m far from sold on the idea. Carpenter’s original, which saw Kurt Russell on his finest comedic form taking on evil sorcerer David Lo Pan in the streets of Chinatown as delivery driver Jack Burton, is a masterpiece of genre-hopping and visual excess. It is also one of Carpenter’s most unique and idiosyncratic films, and marks the start of the director’s more ‘colourful’ period, which continued with 1987’s underrated Prince of Darkness and They Live in 1988.

While Johnson’s comments give no solid confirmation of anything moving along, the Big Trouble remake certainly seems to be something he still has his sights on. It’s not a film crying out for a remake if you ask me, and I’m afraid I’ll remain sceptical for now, but it’s definitely something to keep an eye on.