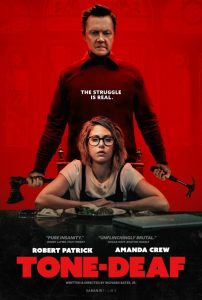 Decades after he scared the living daylights of a budding young horror fan (me) in Terminator 2, Robert Patrick’s urge to kill is rising yet again in the trailer for Tone-Deaf.

Directed by Richard Bates Jr. (Excision), this horror comedy follows Olive (Amanda Crew), a millennial who’s just lost her job and imploded her relationship. Hoping to find some peace, she gets out of the city and rents an ornate country house from an old-fashioned widower (Patrick). Unfortunately for Olive, her host is struggling to hide his psychopathic tendencies.

Tone-Deaf premiered at the SXSW Film Festival earlier this year and will play in limited theaters on August 23rd. Check out the new trailer below.