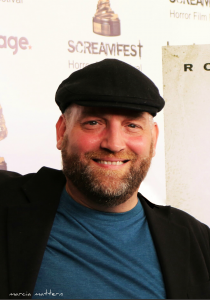 Robert Kurtzman is one of the top FX artists in the industry. He is a charismatic monster maker, with an impressive list of credits including classics like “Misery”, “Wishmaster” and “Thirteen Ghosts”. Robert has also been the leading effects supervisor on a number of horror blockbusters, including a personal favourite of mine, Wes Craven’s “SCREAM”. In our recent live interview at Spooky Empire; we delved into what happens when creating some of the most terrifying characters of the horror world, and his newer films “It Follows” and “Tusk”.

SCREAM: You are known as being one of the most influential FX artists of our time. You also write. Many fans may be surprised to know that Quentin Tarantino actually wrote the cult classic “From Dusk Till Dawn” off one of your short stories. How did that come about?

KURTZMAN: It was about 1988, I wrote a twenty-five-page treatment. I wanted to direct, have it be like a low budget movie. A confined type movie where you confine the characters and setting of the scene, like a siege film. I wasn’t going to do a gang movie. At that time, vampires weren’t overdone, so I came up with this idea of a south of the border strip club ran by vampires. I wrote the story, and originally my partner on the project was John Esposito – he’s the screenwriter who wrote Stephen King’s “Graveyard Shift”, he was going to write the script. But Graveyard had just gone into production and he went away to location for about three months. We didn’t want to wait to get the script written so we started putting the word out that we were looking for a scriptwriter. A friend of mine Dave Goodman and these guys knew Quentin through friends like Lawrence Bender, so Quentin sent me three writing samples. He sent me “Natural Born Killers”, “True Romance” and “Reservoir Dogs”.

The stupidest thing I ever did was at that time only “True Romance” was optioned. “Natural Born Killers” and “Reservoir Dogs” were both available – I should have got them all! My partner and I scraped together $750 bucks each and paid Tarantino $1,500 to write his first screenplay for hire. $1,500 for “From Dusk Till Dawn”, and it made movie history. It took about ten years to get it off the ground because I wanted to direct it, but I had never directed before, so it was this vicious circle with studios. Robert Rodriguez became interested and he was hot off of “Desperado”, so it just made sense. I could have sat around and dreamt about making the movie, or I could let Robert direct it and myself still be involved in the effects and producing, and get a writing credit. It worked out!

When creating a creature for the first time, what sparks the originality – the process from concept to actuality?

Usually it’s working closely with the director, and myself reviewing the script for the tone. Sometimes it just says “the most horrifying thing you can imagine” and you don’t know what that means – but now you have imagine it. Sometimes you have different concept illustrators working with you, and you go through sketches until you hit on that something – that vision – the director likes. It may even be a little bit from this design, and a little bit from that design.

You’ve worked on everything from gory classics like “13 Ghosts” and “Scream”, to comedy type makeup such as “Austin Powers in Goldmember”. Do you favour the more grotesque? 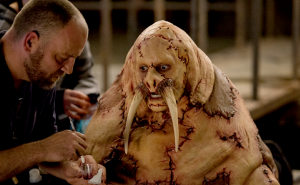 I wouldn’t say it’s necessarily about the gore, but it’s the creature stuff – I absolutely love creating creatures that haven’t been done or break barriers.

The witch in “Army of Darkness” I love. Oh, and “Wishmaster”. I have always loved that character. It was a nice sculpt. Clean makeup. Now “Tusk” has become a favourite as well.

What was one of the biggest challenges starting out?

When I first started out I was a freelance artist for the first five years I juggled from shop to shop, job to job. It was a fairly small knit community of artists, so everybody kind of knew when you were off work or when a shop needed more guys – the I have a buddy and he’s just finishing up over here, ya know. That’s how we artists worked for years. Nomadic artists.

You’re originally from Ohio. When did you know ‘okay, this is what I’m putting everything into’?

I was always interested in it. I’ve been into monsters since I was a kid, read Famous Monsters of Filmland and all that stuff. I was hooked on movies in general. Started following directors like John Carpenter, Spielberg, all those guys. I was a film geek. I knew there was a business for creature creating and that I could do this for a living, because I was reading about these guys who are already doing it. But I was in Ohio and didn’t know where to start. I went to art school after high school, which was doing a lot of drawing and stuff. After about a year in art college, I dropped out because I realised I really wanted to be doing effects and that’s not what I was learning. I took the summer off, worked all summer for my dad, and earned enough money to go to LA in the fall for a makeup course at Joe Blasco’s makeup school that was 12 weeks. Then I started going from shop to shop showing my crude portfolio, until I got a job at John Buechler’s company. That was kind of the starting point for all of us in the FX world, doing about six movies a year, so it was a great place to build credits and learn on the job.

We talked about your favourite makeup, but what would you say is the most challenging character makeup in your years of filmmaking?

“The Bride of Re-Animator”! (Based of H.P. Lovecraft’s characters). She was fully nude with all these pieces that had to be glued on. It took nine hours to do, with a couple of us working on her. Me, Howard (Berger), Mike Spatola. We were all putting pieces on her every day. She had to stand for most of it. We had a slant board and she had to lay on her back, then on her stomach, so we could work on her. Nine hours!

Along with writing and being an FX guru for horror, you’ve also directed some staple films for the genre, such as “Wishmaster”…

Yes. It’s great. I’ve been doing this for thirty plus years now. Lucky enough to come up the business during the hay day of the 1980’s, that was the big effects boom. Allowed me to work on a lot of iconic movies. I enjoy directing, directed five movies so far: “Demolitionist”, “Wishmaster”, “Buried Alive”, “The Rage” and “Deadly Impact”. I’d love to direct more. It’s rough trying to get movies off the ground as a director while also doing the FX work. Financing – such a long process. “From Dusk Till Dawn” was another film that took about ten years to get off the ground. People said the script was too raunchy. Now it’s popular. Currently working on Kevin Smith’s new film. Some of the characters from “Tusk” like Johnny Depp’s character are in there again. Johnny and Kevin’s daughters are actually also in it. It’s wacky, with some great genre stuff in it.

After thirty years in the industry, what is the best part for you – the thing that keeps you coming back? 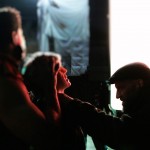 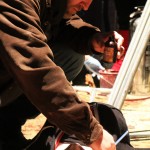 Thanks for speaking to SCREAM, Robert.