The Walking Dead and Fear The Walking Dead creator Robert Kirkman will be bringing his next television show, Outcast, to the small screen this June. Starring Patrick Fugit as the protagonist alongside Philip Glenister as Reverend Anderson, Outcast is an exorcism drama based on a comic by Kirkman and Paul Azaceta. 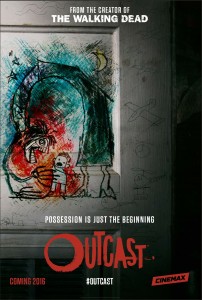 Synopsis:
Outcast’ follows Kyle Barnes (Fugit), a young man who has been plagued by demonic possession all his life. Now, with the help of the Reverend Anderson, a preacher with personal demons of his own, Kyle embarks on a journey to find answers and regain the normal life he lost. But what Kyle discovers could change his fate — and the fate of the world — forever.

A trailer for the show was released at Comic-Con last year and you can check that out below. The atmospheric and quiet beginning slowly builds to a supernatural-dominated climax where people are thrown against walls and levitate above beds.

If you’re in the USA you can also check out a Comic-Con exclusive scene from the show, which proves that less is more. It’s a very tense watch and definitely not for those who are easily spooked, but it definitely shows that Outcast is going to bring more than just your typical possession clichés to the table.