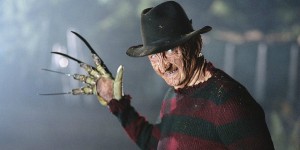 Robert Englund caused excitement among the assembled crowd at Belfast’s Film & Comic Con last month by hinting that he’d like to return to Elm Street one more time. Before you get too worked up however, the iconic actor is sticking to his previous insistence that he has no wish to portray the world’s favourite child killer again, instead hoping to appear without the famous make-up.

In a Q&A session, Englund told the audience: “I would certainly like to be invited to do a cameo, to maybe play the cantankerous old professor or the group therapy guy that doesn’t believe they’re having nightmares. I think it would be fun for the audience.” Thinking back to Wes Craven’s brilliant Scream cameo, where he played the school janitor Fred (wearing an all-too-familiar striped jumper), I’d have to agree.

Englund also talked to the crowd about his thoughts on the universally disliked 2010 A Nightmare on Elm Street remake, and where he believes it went wrong, saying “you don’t ever see any of the people happy go-lucky, they’re never untainted. You need to see before and after so you can invest emotionally with the children. They’re practically zombies from the get-go because they’re haunted by Freddy and I think that was a miscalculation.”

Again, it’s hard to disagree. Whenever and however the dream demon shows up next, he’ll have to up his game, particularly as he may be being watched by his former self.