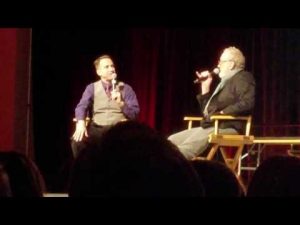 This year’s Monsterpalooza at Pasadena’s Convention Center has thrown up any number of tasty treats for genre fans, and appearances from horror’s biggest stars. They don’t of course, come much bigger than Robert Englund, and the Nightmare on Elm Street legend is always happy to answer the important questions.

Talking to Tony Timpone, Englund was asked about his favourite of Freddy’s kills from the entire Elm Street franchise, and his answer may surprise, given that the scene in question comes from a film that would struggle for a top spot on many fans’ favourites of the series, 1991’s Freddy’s Dead: The Final Nightmare.

“It’s such a Cronenberg head explosion,” said Englund of the scene, which details the icky demise of Ricky Dean Logan’s Carlos. “The guys loved doing that. But yeah, what I love is that it’s a real politically incorrect sequence, ya know. And I hate the fact…I work with actors that are in wheelchairs or have problems with their sight, and they don’t just want to play goody-goody people all the time. They don’t just have to be the good guy; or the nice guy; or the saint; or the martyr. They want to be bad guys and villains as well. And I love the political incorrectness of that. Freddy’s an equal opportunity serial killer. He doesn’t care if you’ve got a hearing aid. He’ll get ya. That’s my favourite Freddy kill. Because of all the ramifications for it.”

So there you have it, Freddy Krueger’s favourite of his own murderous misdeeds. Check out the scene in question below.