We still don’t have a release date for Three from Hell, but Rob Zombie is here to stoke the flames of our excitement. The musician-turned-filmmaker recently shared a new shot from the movie on his Instagram, and it’s got us more intrigued than ever.

The image shows Otis Driftwood (Bill Moseley) sitting in a prison cell listening to his radio. “Otis may be spending his days behind bars but at least he’s still got his music,” Zombie wrote in the caption to the post. 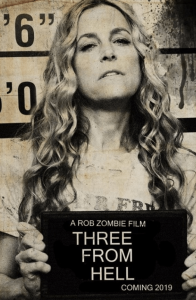 Three from Hell is the third chapter in the Firefly family’s story, following 2003’s House of 1000 Corpses and 2005’s The Devil’s Rejects. After more than a decade of waiting, we’re finally going to find out what happened to Otis, Captain Spaulding (Sid Haig), and Baby (Sheri Moon Zombie) following the hail of bullets that rained down on them at the end of Rejects. This new image suggests they’ve spent those years rotting behind bars, but we doubt very much that they’ve been model prisoners.