Shortly after giving us our first pics of Bill Moseley’s Otis and Sheri Moon Zombie’s Baby in 3 From Hell, Rob Zombie posted this look at Captain Spaulding (Sid Haig). Most recently, the director posted this onset image of himself with Moseley and Danny Trejo, who also stars. 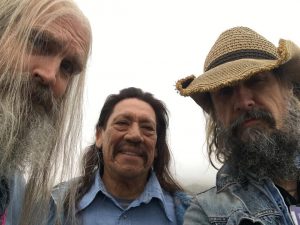 It had long been assumed by many that the film’s title referred to Otis, Baby and Spaulding returning from the grave, having perished in a hail of bullets at the end of The Devil’s Rejects. The images of them being led from court to prison however, suggest that they survived the shootout.

Editing on 3 From Hell is on hold for now, with Zombie joining Marilyn Manson on the road for their Twins of Evil tour.