The king of clowns, Rob Zombie has given us another look at his not-so-funny circus crazy movie, 31, and it looks like we’re in for a fun time.

The film is currently in it’s editing stages but we know there’s going to be plenty of horrifically hilarious clown characters in the form of Sick-Head (Pancho Moler), Doom-Head (Richard brake), Sister Serpent (Jane Carr), Father Murder (Malcolm McDowell) and many others that you wouldn’t want to meet in a dark alleyway.

Rob Zombie summed up all you need to know about his gory clown carnage movie:

“Welcome to my next film. It is called 31. It is the story of five random people kidnapped on the five days leading up to Halloween and held hostage in a place called Murder World. While trapped inside this man-made Hell they must fight to survive playing the most violent game known to man… a game called 31. 31 has no rules. 31 has no boundaries. It is ever so simple. Do whatever you can do to kill your opponent before they kill you. Keep this up for 12 hours and freedom is yours.” 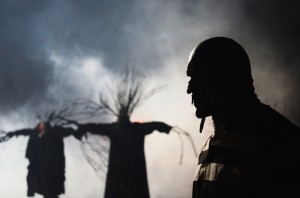 Who are the opponents?

“Well… a group of vile, filthy, blood-thirsty clowns known as THE HEADS. They come in all shapes and sizes and each grows nastier than the last.”

What kind of film is this you ask?

“It is a fast paced, mean dirty film for those who like it rough. Get ready for a sick piece of celluloid! This is some hardcore business for the blood-thirsty gore hounds.”