Rob Zombie put the Feelers out for Firefly Reunion

Rob Zombie has caused a storm of excitement and speculation with a few words posted on his Instagram account. Beneath the classic poster for The Devil’s Rejects showing Spaulding, Baby and Otis, the director and master of heavy metal theatre wrote: 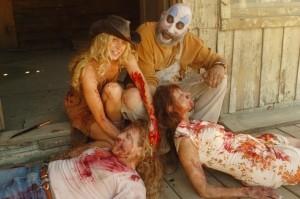 “Just curious would anybody be interested in watching another movie starring these three characters? Enough interest and anything can happen.”

Does Zombie have an idea in mind to resurrect the Firefly clan? Or is he just gauging fan interest? We all know what happened to “these three characters” at the end of The Devil’s Rejects, so unless he’s thinking of something pretty out-there (and don’t bet against it), a prequel to House of 1000 Corpses could well be what he’s thinking.

While I’m a big fan of all Zombie’s films (yes, even those ones), critics have generally been less than magnanimous regarding his post-Devil’s Rejects output, so bringing back the psychotic Fireflys could be a smart move if he’s looking to get those approval ratings back up. His latest, 31, played at this year’s Sundance Festival to the usual luke-warm reviews, some declaring the film enjoyably and characteristically grimy, others (honestly, most) finding it somewhat lazy and rushed. I’ll no doubt adore it, then.

I’d advise against getting too excited about a Firefly reunion just yet. Zombie has gone quiet about his speculative remakes of The Blob and C.H.U.D, and his once-hyped Tyrannosaurus Rex will presumably never see production. Put this one on the pile for now.