RLJ to Unleash a Serial Killer with The Limehouse Golem 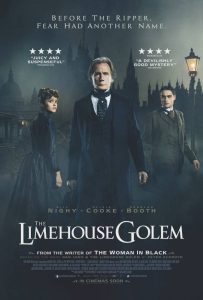 The city of London is gripped with fear as a serial killer – dubbed The Limehouse Golem – is on the loose and leaving cryptic messages written in his victim’s blood. With few leads and increasing public pressure, Scotland Yard assigns the case to Inspector Kildare – a seasoned detective with a troubled past and a sneaking suspicion he’s being set up to fail.

Faced with a long list of suspects, including music hall star Dan Leno (Douglas Booth), Kildare must get help from a witness who has legal troubles of her own (Olivia Cooke), so he can stop the murders and bring the killer to justice.

You can check out the trailer for The Limehouse Golem below which shows Kildare struggling to discover the identity of the tormenting killer. It looks like a top-notch mystery, propelled by the performances from the strong cast and the exquisite cinematography. The trailer is coated in shadowy mystery, which emphasises the story’s twists and turns and the over-arching sense of fear and panic that is consuming the city.

Directed by Juan Carlos Medina (Painless) and written by Jane Goldman (The Woman in Black) The Limehouse will be released in cinemas in the UK on 1st September. Keep an eye out for a US release date.