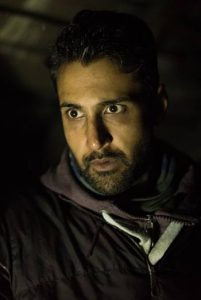 Synopsis:
A group of middle-aged male friends travel to Northern Sweden for a wild camping holiday but after veering too far from their pre-planned path, the chaps start suffering supernatural hallucinations which twists their trip into a terrifying, blood-soaked battle for survival.

Harsh woodlands have served as a reliably frightening backdrop for countless classic horror movies over the years but with David Bruckner’s latest; The Ritual, the VHS and Southbound segment director (with iBoy screenwriter Joe Barton) has crafted an intense and daunting deviation from the well-charted forest set frighteners. Despite at times recalling The Blair Witch Project, The Witch, Dog Soldiers, The Wicker Man and The Evil Dead, mostly due to the setting, The Ritual (based on the novel by Adam Nevill) feels like a pioneering subversion of sub-genre tropes and plot components, fused to form a unique, brave and compelling horror masterpiece.

Like most films (particularly horrors) The Ritual is best savoured with as little prior plot knowledge as possible. The set-up slyly leads viewers (and characters) into a false sense of security. What starts with a bunch of mid thirties fellas (Rafe Spall, Rob James-Collier, Arsher Ali, Sam Troughton) in a pub planning a trip away, soon warps into a phenomenally weird, terrifying and totally cursed expedition. After the archetypal pseudo geezers are introduced they are gradually deepened with defects and complexes while en route. Tragedy strikes as fermenting tension erupts into hard drama which splinters then re-shapes personalities and story paths while embellishing buried themes. Well-timed, facetious comedy lightens the road (and load) as “antagonists” try to darken it; but despite its foreboding horror, cowed humour courses through The Ritual’s clogged veins like an untested antivirus for raw satanic agony. 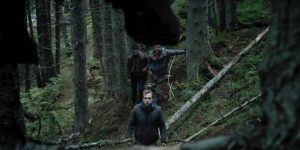 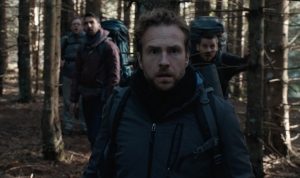 While the likes of Abbot and Costello Meet Frankenstein, An American Werewolf in London, Evil Dead 2 and Sean of the Dead are widely considered benchmarks for horror comedy blending, The Ritual almost follows suit. Laugh levels fluctuate between the pounding frights and dialogue driven character development, but some of the humour may date Bruckner’s film, or at least, one day, make it retro. References to “selfies”, Uber, Trip Advisor, Brexit, dot the dialogue along with characters asking “really?” in that ironic way, but most of the jokes land efficiently. Darker facets outweigh the laughs as the narrative twists and dissipates like melting splayed entrails before blobbing into an uncanny plot then budding into the most frightening film of the year so far, whilst lunging for the finale.

For a long time, it’s difficult to work out what shape The Ritual will spatter into: or whether its featured forces are ghosts, witches, monsters, mad men or just our/ the characters’ own jaded imaginations. Bruckner shrewdly utilises our fear of the unknown by nurturing dread and our interpretation of it. At one point, The Ritual even seems like it could turn into another secret Blair Witch sequel, as cogs are cunningly woven and red herrings deployed while the plot takes a turn for the bonkers. The film also remains a constantly fine example of how modern genre film-makers are more efficiently crafting comedy with horror, even though, in this instance, the humour is often modest: dissolving like an Alka-Seltzer for a day of reckoning hangover. Tension is amplified through jagged anticipation, whipped fittingly with relatable drama by way of decent performances from all the cast. Conflicts range from small scale skirmishes to personality clashes that sharpen the jump scares and augment the characters’ bubbling tautness. This makes it an unforgettable and often tormenting experience that is so much more than viewers will expect. 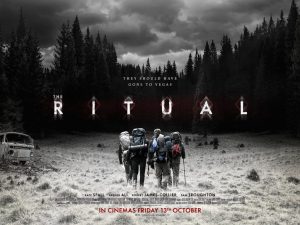 After a first viewing, The Ritual resounds as, so far, by far the best horror films of the year and one of the greatest British horrors films ever made. It’s a work for hardcore horror fans which sensitive viewers and wild camping enthusiasts should approach with extreme caution. Bruckner rustles frights next to the fear of God and does wonders with Adam Nevill’s source material. This makes The Ritual a skin crawling, hair raising, skull shuddering, brain rattling, heart stammering and bowel troubling modern genre classic.