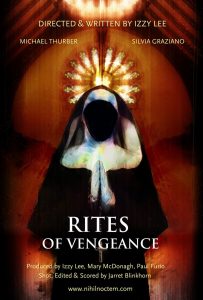 Synopsis:
A trio of nuns decide to take matters into their own hands when they discover that their priest has been engaging in some sickening and decidedly ungodly behaviour.

In a review elsewhere for Izzy Lee’s previous short sharp shock, FOR A GOOD TIME CALL… (2016), I opined how it would be a fine thing to see her given the opportunity to helm a CREEPSHOW-style anthology film. And, while clocking in an even sharper four and a half minutes, her latest mini-opus RITES OF VENGEANCE goes a long way to strengthening this case.

While GOOD TIME was almost a modern-day EC Comics morality tale, RITES traverses even darker territories. Opening on a shot of the eaves of a rather splendid old church, Lee’s camera pans down to reveal an aged priest solemnly completing his final bible reading of the evening. He completes his ritual by blowing out a candle and retires to his chambers. We don’t need to see the Polaroids he pulls out of a drawer and leers at all-too-lovingly to know what’s on them, pulling the rug out from under us in completely negating the quiet dignity at first suggested by the figure. As he’s absorbed in his disgusting passion, a wimple-wearing female figure appears behind him at a doorway. As she’s joined by two other nuns wielding baseball bats, we immediately know that this ‘man of God’s’ nasty-ass, hypocritical goose is cooked.

A short, simple tale, and all the more disturbing for it. It’s doubly effective for being told without the use of dialogue or sound effects, while in their place Jarret Blinkhorn’s ominous synth-driven score, redolent of Fabio Frizzi’s work for Lucio Fulci, cranks up the fear factor.

Impeccably framed and shot, with razor-sharp editing to match, RITES is a masterclass in economy of storytelling. Just from the expressions on the actor’s faces, the nuns’ glances at one another, we get the whole story; their ethical dilemma, the conversations they must have had and, most troubling of all, the abuse that must have been going on for decades.