The world of horror cinema has lost another important filmmaker, in the shape of Cannibal Ferox director Umberto Lenzi, who passed away in Rome, aged 86. Further details of his death are yet to be reported.

One of the giants of Italian exploitation, Lenzi began his career with Spaghetti Westerns and action/war dramas, and directed over 60 films between 1958 and 1992, including So Sweet…So Perverse, Eyeball, Ghosthouse, Spasmo and the batshit zombie splatter gem Nightmare City. 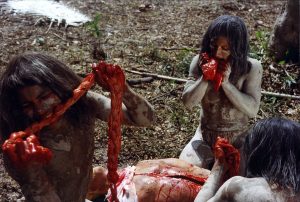 Perhaps Lenzi’s most significant contribution to Italian horror came with his 1972 jungle epic Man from Deep River (aka Sacrifice! aka Deep River Savages), which is regularly credited as the film that kicked off Italy’s cannibal subgenre. Lenzi revisited such themes in 1980’s Eaten Alive!, the same year as Ruggero Deodato’s ramped things up a few levels with Cannibal Holocaust. Lenzi was not done though, releasing his equally nasty Cannibal Ferox the following year.

Lenzi leaves behind a significant and truly nasty cinematic legacy and, for those like me who grew up watching his films on VHS, this is a sad one.