Revenge is Bloody in Trailer for Ted Geoghegan’s Mohawk

March will see the release of period revenge thriller Mohawk, the second feature from We Are Still Here director Ted Geoghegan. We’ve seen a good few images from the film previously, and now Dark Sky Films have given us our first trailer. It’s packed with rapidly-cut violence and strikingly colourful visuals, and looks pretty special. 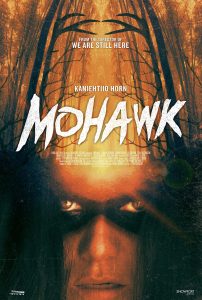 The War of 1812 has revived violent hostilities between the British and their erstwhile American colonial subjects. The powerful Mohawk nation of the New York region is divided as to whom they should stand by, and so they maintain a position of neutrality. They want no part in the killing – but the killing is coming to them.

An impulsive attack on an American encampment has drawn the vengeful attentions of a ragged band of American military renegades, led by the vicious, racist Hezekiah Holt. Oak, Calvin, and their British lover Joshua flee into the woods so familiar to them, but the murderous musketeers on their trail will not be deterred. Not without the spilling of blood.

Mohawk sees Geoghegan reteam with We Are Still Here producers Greg Newman and Travis Stevens, who between them have producing credits on Starry Eyes, House of The Devil, Cheap Thrills and Stake Land among many others.