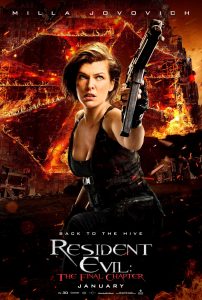 Synopsis:
Post-apocalyptic zombie eradicator Alice (Milla Jovovich) has forty eight hours to return to Raccoon City and find a cure for the T-virus that started the outbreak. But evil tyrants, gun-toting henchmen and hordes of the slathering un-dead beset her path and will do anything to stop and/ or eat her.

Last month’s Underworld: Blood Wars was a belated, unexpectedly decent sequel which surpassed expectations mostly due to a rejuvenating story and new-to-the-series director Anna Forester. This week, Sony Pictures (the same distributor) release Resident Evil: The Final Chapter, which, like Blood Wars, arrives after a five year franchise hiatus. Unlike Underworld: Blood Wars, The Final Chapter retains regular series writer/ director Paul W.S Anderson but (possibly as a result) is perforated with the typical snags which mired the previous films.

Industrial “music” by Paul Haslinger rattles the opening credits before a “last time on Resident Evil” style catch-up, similar to Underworld: Blood Wars’ unravels, during which Umbrella Corporation origins are relayed, along with how they generated the T-virus and A.I tyke The Red Queen. An energised set-up then re-introduces Alice in her comfort zone (marooned on the cusp of death in a zombie swamped desert) just before she is chased by an infected, and slightly miffed dragon. Several severed heads later and Alice is back in the company of the Red Queen who tasks her with a quest, the promise of an antivirus and revenge on an old foe.

Alice battles digital monsters and corrupt capitalists while journeying back to Raccoon, while a chance encounter with a throng of stragglers and a familiar franchise face, arms our heroine with allies. Pounding, gutsy action, disorientating stunt sequences, industrial horror and impressive effects gild the first forty minutes but when the carnage subsides and dramatic range/ character depth are required, RETFC wanes into the cinematic equivalent of being shot in the neck with a tranquiliser dart. Meathead stereotypes, hollow to non-existent drama, bulky exposition and doddery dialogue do nothing to drive the plot or illicit emotion, leaving just the synthetic surface mayhem to retain our attention. 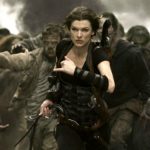 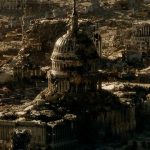 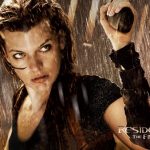 Not that we were ever meant to feel anything. This is Resident Evil not Shadowlands. But some kind of emotion or plot elucidation would be a monumental improvement. Instead characters kill in slow motion or stand there looking cool while all hell breaks loose behind them. Milla plays Alice as a staple, indestructible superhuman monster masher (like Underworld’s Selene). She spits blood with lipstick after taking a massive beating then hacks through a jungle of limb munchers or blasts someone’s face off with a triple barrel shotgun. Alice recalls nothing of her life before the first film, claiming to have amnesia and raising the classic adage: who the fuck is Alice? She’s emotionally cold, psychologically fractured but focused due to being conditioned by constant kill frenzies. Most of the male characters seem leaden, contented and desperately in need of a Strepsil. Their bristly oesophagus’, borrowed from Jason Statham results in dirty dry snarling to suggest they are hard. 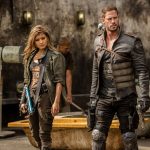 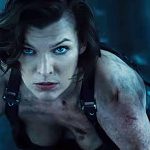 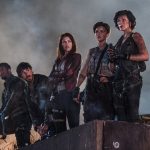 So thank Christ for the zombie dogs which return rendered much better than the first Resident Evil movie, or the Satanic mutt from The Bye Bye Man. The salivating canines kick off a vivacious chase scene which culminates with a cliff plummet after which Alice overlooks a golden rule: you can’t drown a zombie dog. Further violence unravels frantically, fissured via astounding editing by Doobie White. Each thwack slams fast like a strobe of fists, kicks, stabs, rips and blood jets. Meanwhile a meagre attempt to incorporate themes and ethos’ on population control and global warming reside muffled beneath the action like a latent subtext.

Confused clones battle each-other in an elongated finale while genetically modified villains render everything else wretched. A few key components that made the first film appealing are reintroduced, slightly elevating the finale into two-star terrain but ultimately, this “Final Chapter” booms as a breakneck whack of action/ horror road-kill with a couple of thousand volts shot through it. Despite claiming to be the last in the series, as any genre fan will know, “The Final Chapter” often means nothing of the sort, just one of many nails in a franchise’s coffin. Series enthusiasts, and some horror fanatics, will probably find stuff to enjoy in this “final” entry. The zombie dragons alone will be worth the admission price for some, but it should be labelled as strictly for established fans only.