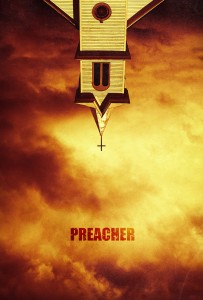 Writer-directors Seth Rogen and Evan Goldberg have spoken about their upcoming TV adaptation of Garth Ennis’ Preacher comics, and how it will differ from the printed series. While adapting the long-running series into a standalone film would prove near-impossible, there is a good reason why no TV adaptation appeared years ago; the source material is not only brutal as fuck, but presents alternative takes on established belief systems. The level of violence required (let alone the blasphemy) would simply have been out of the question until recent years.

One of the biggest changes to the comic relates to the character known as Arseface, who earned his moniker following a failed suicide attempt in which he blew his face apart with a shotgun, aping his hero Kurt Cobain. Talking to Collider, Rogen had this to say: “There had been something online of some test that someone had done that looked exactly like how it looked in the comic, and as soon as I saw that, I knew we should not try to make it look exactly how it looked in the comic, and we should take some license and try to make it something maybe a little more … palatable, I guess might be the word. And we wanted the character to being sympathetic and ultimately, like, some one you really rooted for” 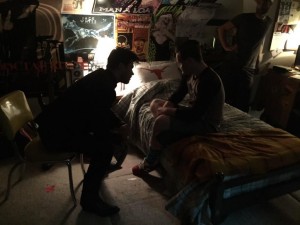 Rogen then added, jokingly: “We want the show to be fun for regular people with not sick sensibilities. Put that on a poster.”

There’s a tease of Arseface’s look in the image (left), although his face is hidden. He is played by Ian Colletti, who appeared in Matt Farnsworth’s The Orphan Killer in 2011.

Garth Ennis’ justifiably celebrated cult comic ran from 1995 – 2000 and tells the story of small-town preacher Jesse Custer (played by Dominic Cooper in the series), who gains unholy powers after becoming possessed by the offspring of an unnatural union between an angel and a demon. Joined by his old girlfriend Tulip and alcoholic vampire Cassidy (This is England’s Joseph Gilgun), he slaughters his way around the United States in search of God, who has abandoned Heaven.