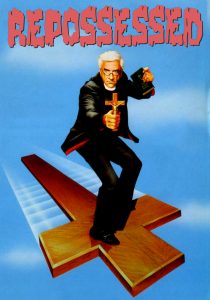 In the 43 years since The Exorcist’s release, William Friedkin’s seminal classic has spawned its fair share of sequels, prequels, TV series’ and spin offs, not to mention the incalculable number of rip offs, homages and self-labelled accolades which have “graced” our cinema and (mostly) home screens. Whether crafted with love or financial incentive, none have come remotely close to recapturing the brilliance of Friedkin and Blatty’s original masterpiece despite a few reputable efforts. Blatty’s own film adaptation of literary sequel Legion (The Exorcist III), had a fair few frightening moments. Paul Schrader’s prequel Dominion was dishonourably shunned (but became highly regarded in retrospect) in favour of Renny Harlin’s cosmically botched Exorcist: The Beginning, and Fox’s recent TV series earned favourable reviews.

One of The Exorcist’s less revered, unofficial by-products was the largely forgotten, widely discarded 1990 parody, Repossessed. This pseudo sequel/spin-off/spoof starring Leslie Neilson and Linda Blair, is in no way officially affiliated or considered canon but has thinly disguised franchise ties and wonky hat tips which indirectly link it to Friedkin and Blatty’s original. 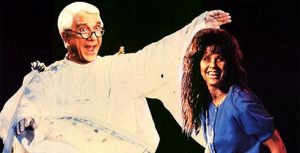 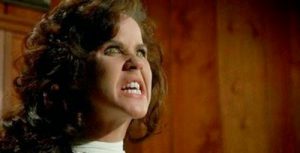 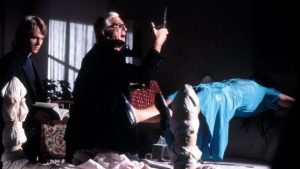 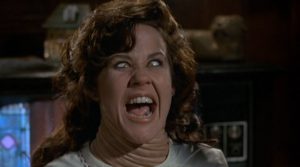 Linda Blair “reprises” her role as the possessed Nancy Aglet while Neilson adopts the moniker of ecumenical clutz Father Jedediah Mayii (yes, you may) in place of Max Von Sydow’s Father Merrin. These, and the backstory, are flagrant gibes, along with the presence of fresh faced protégée Father Luke Brophy (adopting the Damien Karras role) while countless other comparisons stem from plot parallels and staggeringly hackneyed franchise cracks. Arriving in the wake of Leslie Nielson’s Naked Gun triumph and only a month after the theatrical release of The Exorcist III, Repossessed lacks any competent comedy/horror or redeeming features, bar a single neat split screen quip and a decent performance from Linda Blair, who is still frightening when snarling with those maniacal eyes but can’t deliver a competent gag here, simply because there aren’t any. Considering the fruitless taunts and chances to rag on the original Exorcist’s countless classic scenes, all attempts to do so have been phenomenally bungled. In many cases, Repossessed directly replicates then exaggerates scenes from the original film (explosive vomiting, perpetual stair falling and continuous neck coiling), instead of subverting /sending them up by way of ingenious twists/stone-faced delivery. 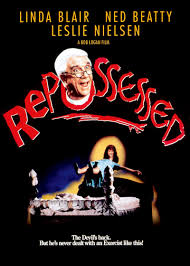 From the elaborated opening jeer at The Exorcist’s ending, the film deteriorates into an inebriated gag reflex before liquefying into abominable, vomit tinted cine-dribble, as the story dissolves into an inane roster of face achingly grating slapstick, flat sight/fart/dad gags, cheap nudity and relentless sexism. Most of the jokes are agonising and wouldn’t make the back of a lolly-stick/inside of a Christmas cracker. What there is of originality and plot divergence is gaudy, crass and comes in the guise of TV evangelist couple Ernest and Fanny Weller (Ned Beatty and Lana Schwab), a vacuous Christianity milking celebrity marriage/partnership set to capitalise on Nancy’s exorcism in conjunction with the church. Ernest and Fanny televise the event, reducing it to the type of kitsch primetime happening, similar to what director Bob Logan has done with his derivative send-up, which turned out to be his second from last feature as director. 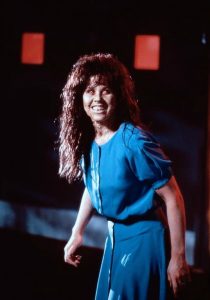 Logan previously worked with Linda Blair on journalist rom-com Up Your Alley before directing this hotchpotch mockery which fittingly pathed the way to helming Meatballs 4 in 1992: a franchise more befitting to his inane comedic style. Considering Logan has recently resurfaced to write and co-direct the upcoming The Lego Ninjano Movie, it makes one question as to whether or not he has spent the last twenty seven years refining his style or if he still has his work cut out for him. No doubt fans of both The Exorcist and Naked Gun/Airplane franchises would have already experienced and consciously abolished this stomach churning wretch of a send-up from their memories/waking lives, but for those slightly intrigued and untarnished few who have yet to be subjected to this putrid waft, for God’s sake get out/avoid at all costs! Repossessed is more fetid and pungent than out of date pea soup encrusting in the sun next to a fly monitored vomit splat. Even the most morbidly curious, hardened cinemasochists with the lowest expectations will probably still be completely appalled ,or pleasantly surprised depending on how high they are.