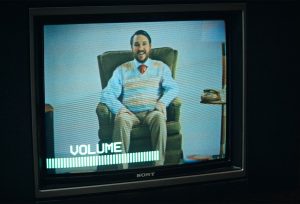 Synopsis:
David (Brian Landis Folkins), a lonely bachelor caring for his ageing mother (Kathleen Brady), is looking for companionship through a video dating service. Having little luck, he stumbles across a corny VHS tape called Rent-A-Pal, hosted by the charismatic Andy (Wil Wheaton). The tape provides some much-needed company and compassion—but Andy’s friendship comes at a cost…

Younger readers might not remember that there was a time when anyone with a camcorder could churn out a VHS tape, slap a cover on it, and sell a few copies in video stores. This led to a proliferation of weird, cheaply produced tapes in which people filmed their pets running around, filmed their kids doing clumsy magic tricks, filmed themselves pretending to be your romantic partner. Rent-A-Pal perfectly encapsulates the strange and often slightly unsettling nature of these celluloid oddities, so it’s no surprise to learn the film was inspired by a real tape that writer-director Jon Stevenson found.

The tape in this film is the titular Rent-A-Pal, a kind of proto Dora the Explorer in which the smiling, sweater-wearing host Andy asks a question and pauses to let the viewer answer, occasionally nodding or asking them to “go on.” Protagonist David at first cocks an eyebrow at this ludicrous premise, responding to questions with expletives before the novelty wears off and he decides to watch porn instead. But later, he goes back to Andy, using the pre-recorded companion as a sounding board as he gradually lets out all the pain and frustration he’s been bottling up for years.

Watching David initially succumbing to Andy’s charm forms some of the film’s most compelling scenes. Folkins does an excellent job of making us empathise with David’s situation, and there’s something both sweet and tragic in the way he finds comfort in the tape. Like his mother, who spends every waking hour in front of the television, briefly emerging from the thick fog of her dementia when watching her favourite film, David finds a lifeline and a connection to the outside world when staring at the “friend” on his screen.

As his obsession grows, however, the film starts to stray into sillier territory. While Wheaton is perfectly sinister as Andy, his dorky, upbeat personality barely hiding a nasty, misogynistic streak, the script struggles to convince us that David would ever skip out on a date with his dream girl to hang out with a videotape he now knows by heart. There’s some commentary in there about the toxic bonds men can form when they consider themselves ill-treated by women, but the film starts to squander the goodwill it earned in its first act as it sends David down an increasingly dark—and unconvincing—path.

Rather than course correcting, Rent-A-Pal doubles down on this character arc as it goes into its bloody but unsatisfying climax. The film ultimately does too good a job establishing David as a sympathetic figure in the early scenes, because his personality shift feels too drastic to be believable. Stevenson may have felt the need to go big with his debut feature, but it’s ultimately the little, niggling details—like the unanswered questions about Andy’s backstory—that give the film its haunted air.

Rent-A-Pal gets off to a strong start, but the tape jams somewhere in the middle. Bolstered by thoughtful performances and an immersive retro aesthetic, it provides a bleak view of the pre-internet age that feels nonetheless relevant to our modern world—but it won’t leave you yearning to rewind and watch again any time soon.