Comic author Cullen Bunn is one of the most unique writers to have emerged out of the modern comic fandom revival that we are currently a part of. Having traversed the wilds of every major publisher in the industry, it’s his take on the horror genre that has truly set him apart from other wandering creators. Not only does he crawl deep into the human psyche but he uses his own life experiences as a basis. One of his most popular works, Harrow County, was inspired by growing up in rural North Carolina (which has also earned some pretty sweet awards), and following on the success, his newest work, Regression, will once again tap into that weird part of his life: childhood. Lightly based off his own experience as the son of a past life regression hypnotist, Bunn explores what happens when the regression brings something back.

Focusing on the lead Adrian, the comic bursts onto the page with a smatter of bugs, bodies, and whispered curses. You see, Adrian suffers from hallucinations. Never knowing when they would come, he spends his days acting as normal he can while watching insects pour from every orifice of his friends. After a particularly bad BBQ, his girlfriend suggests hypnotist and though initially reluctant, he finally agrees for her peace of mind. Little does he know that the hypnotist is not just going to delve into his mind, but all the way into his past life in a technique called regression and it’s a past life that is not done with Adrian. A life filled with death and bugs and a monster that won’t let him go. 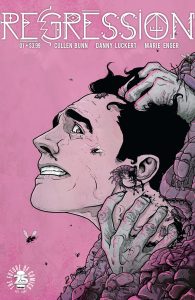 Hypnotism is a surprisingly underused horror trope and only just recently has seen a bit of revival, so it’s a fun twist to see it utilised in such a unique way. Bunn goes beyond the standard ‘swinging pocket watch’ and mixes a supernatural angle in it with the past life regression, bringing the characters monsters to actual life. While we don’t know much about the enemies that Adrian is facing, the set-up promises a pretty wild ride that will delve into a very dark world. Speaking of Adrian, the characters float wonderfully along in the comic, not getting bogged down by unnecessary exposition or boring dialogue. Everything that is said and done is aimed at telling the story and Bunn allows his artist Danny Luckert to illustrate the characters in an expression of individuality while knowing that the reader is smart enough to fill in the rest.

Luckert has a very precise style when it comes to his artwork. It’s very detailed with a fine ink work comes off as truly unsettling with Bunns work. Though he’s got a great knack for facial expressions, a lot of the characters seem like their posed and look more like fashion illustration or paused movie stills than a comic. But his clean work comes off beautifully in the splash pages, so it’s a good trade-off for a minor detail. Altogether, Regression does what it’s set out to do: present a good, ol’ fashioned horror story that will have readers eager to see what happens next.